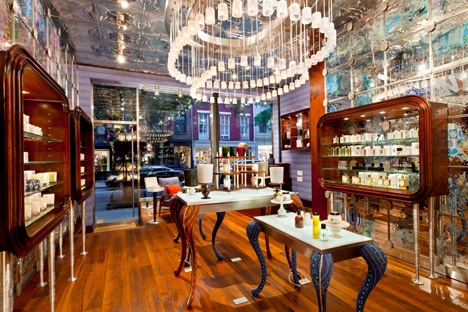 The consultancy was appointed to the work on the strength of a Diptyque pop-up store made permanent in London departmebt store Liberty.

Jenner will also go on to design Diptyque stores in Japan, China and Chicago. Consultancy founder Christopher Jenner says that a ‘storytelling of the brand’ has to be matched with a ‘cultural disemination of the home environment’.

This means that in the New York store the consultancy has looked to local indigenous Mohawk history, late 19th- century industrialisation, travel, and the relationship between France and America as inspiration.

The consultancy has used Mohawk patterns to produce fabrics, with most of the features produced by British craftsmen.

These include 200 mirror pannels, painted in the UK, tiles which show changing seasons, and an engineered floating metal structure with acid-cut edging where fixings between metal bracings feature 500 Diptyque logos.

Jenner says Diptyque’s French stores – which have traditionally been monochrome –  are based on ‘a typical perception of what is luxury’ and may also be overhauled.