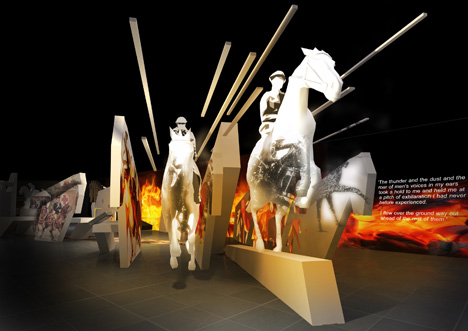 The exhibition takes inspiration from Michael Morpurgo’s War Horse book and its theatre adaptation and tells the story of horses throughout British military history, from the Medieval period until World War I.

Met Studio was appointed to the project following a five-way unpaid pitch against other UK consultancies in February this year. The National Army Museum’s in-house team created the graphics for the show.

Peter Karn, Met Studio associate, says, ‘They didn’t just want another historical object-based gallery. We wanted those elements but we also wanted something more experiential – that’s one of the reasons I think we won the job.’

Karn adds ‘It’s more of an emotive journey that the visitor takes through the exhibition: they can connect with the people, places and feelings behind the objects to give it more meaning.’

The 280m2 gallery space, which comprises five main rooms, spans a 1000-year history of horses in war, beginning with horses their natural environment, and culminating in World War I. Karn says it has a mainly sepia feel, with ‘red, fiery’ graphics in places to symbolise conflicts.

The exhibition includes a ‘below-deck experience’, showing visitors how horses were transported to conflicts, with ‘theatre style’ props and sound-effects.

The museum commissioned sculptor Laura Antebi to create a full-scale wire horse sculpture to symbolise those caught in barbed with in World War I.

Karn adds, ‘The main challenge was to create an exhibition associated with the Morpurgo’s book, to not alienate the fans, but also have its own identity with factual, educational elements.’

War Horse opens on 22 October and runs for 12 months