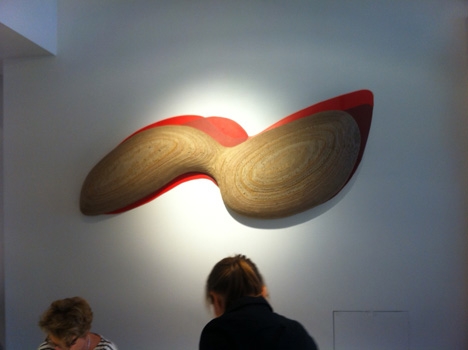 Meitlis has worked with Ottolenghi for over eight years and created the original designs for the Islington branch.

Meitlis has created the designs for all Ottolenghi’s restaurants, which also include the Notting Hill and Kensington branches of Ottolenghi and Soho restaurant Nopi, which opened in February.

Work began on the Islington branch at the end of August. An Ottolenghi spokeswoman says that it was decided to refurbish the branch as it had been open for seven years, and it was felt the space could be utilised more effectively.

The Islington branch is the largest of Ottolenghi’s restaurants. The interiors mostly feature communal tables, with some for two.

The predominantly white and red colour palette has been retained, though the door at the front has been moved. A counter with high stools for extra seating has been added.

Artist Tamar Blum Zidon has created a large wall sculpture for the space (pictured), which incorporates the red of the interior’s colour palette.

The restaurant reopened at the weekend.