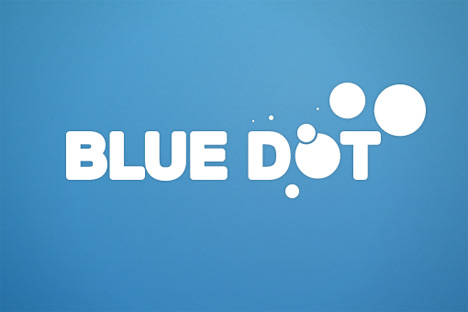 Users can collect the Blue Dots by donating through the Just Giving online donations scheme, and can then exchange the currency for goods such as books, CDs and films. The scheme has been set up by Chris Ward, creative director for Comic Relief.

The consultancy was appointed to the project about six months ago without a pitch,  having previously worked with Ward on the 1Goal 2010 World Cup campaign.

The project involved designing the website, Facebook and apps and creating the logo, which will initially be applied online. It will later appear on physical collateral such as print advertisements.

Alan Long, Sane & Able creative director, says the logo is based on the idea of looking at the world from a distance. He explains, ‘It’s got the planetary spectrum, and all the dots are in the size of the different planets.’

He adds, ‘The logo needed to be obvious and have the words in there – it’s quite a young, quick market so it can’t be too complicated – you have to see immediately what it is.’

Long adds that the website is ‘flexible’ to allow it to easily be changed in future. As well as featuring links with Twitter and Just Giving, users can upload their ‘social CV’, showing prospective employers their charity involvements.

The Blue Dot website will have a soft launch on 13 September, and it is hoped it will fully launched by the end of the month.

on the outside looking in

Pull up a chair