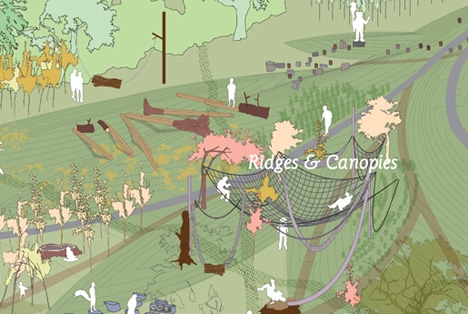 The joint proposal was one of 60 expressions of interest and beat shortlisted groups Erect Architecture, Kinnear Landscape Architects and Studio Weave with Wayward Plants.

The new playspace will be created in a newly landscaped area of the Lee Valley Park in the London Borough of Newham.

The Architecture Foundation worked on behalf of The Legacy List Charity, The Olympic Park Legacy Company and Lee Valley Regional Park Authority to develop the project.

We Made That approached Free Play, which specialises in building play-scapes to produce a design, which according to We Made That partner Oliver Goodhall, is bringing together ‘a wild kingdom of misfitting objects, like tree stumps, amphitheatres and rope canopies’.

Goodhall says that in the context of the topography of the landscape ‘conjoined objects, imagination, seasonal change and terrain all act as agents’.

There will be seasonal planting and the feel of a ‘wild forest’ where ‘we have taken the lawnmower for a walk.’

Work is expected to start in Spring 2012.