RSPCA Assured is a membership organisation, largely made up of farmers and food producers, first set up by the RSPCA in 1994. It is also the only farm assurance scheme where members must meet animal welfare standards set by the RSPCA.

The food supplied by these farms to supermarkets carries the Freedom Food mark, which will now be replaced by the new identity.

Harrison Agency has worked with Freedom Food for several years, and creative director Chris Harrison says: “Pack recognition with consumers is really low” and that the blue label “never really stood for anything other than freedom, which can be misleading as it doesn’t have to mean free range”.

One of the main problems was that “the consumer didn’t understand what the ‘f’ stood for” and that the Freedom Food wording wasn’t picked up as it was so small says Harrison.

Research showed that consumers were responding to the RSPCA brand – “One of the most recognisable in the UK”, according to Harrison, who has used the RSPCA logo in the new brand.

The RSPCA stipulated that the new brand needed to include more than one kind of animal and Harrison worked on many routes before coming up with the final design.

“It had to be applied as a small mark and work on a variety of different surfaces – some of them quite crude, like egg boxes,” says Harrison, who has used a circular device “as it is easier to place on pack and it’s distinctive and elegant”. 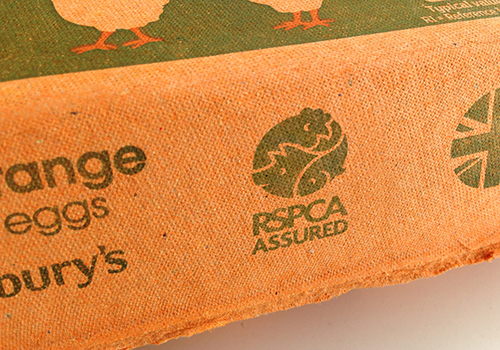 Companies which carry the mark include McDonald’s, which uses RSPCA assured chicken and Sainsbury’s, which stocks a wide range of products including beef, milk, eggs, poultry and salmon, all of which will carry the new identity on pack.