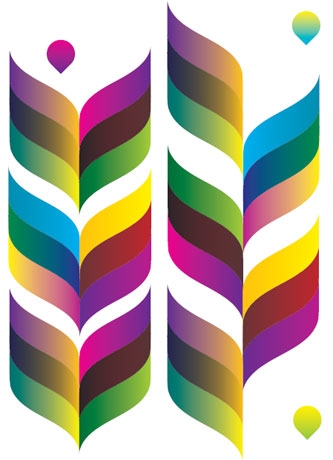 While the paper and print industry has made great strides towards sustainability over the past decade, the recession has hampered the speed of innovation in the last few years. Rather than seeing any major breakthroughs, recent industry progress has been incremental. ‘The market for graphical papers has shrunk, and this has restricted the scope for the paper mills to innovate,’ says Sion Whellens, director of ethical and sustainable printer Calverts.

On the upside, Whellens points out that sustainable choices have emerged as rivals to their traditional counterparts. ‘Recycled paper is a mature product, and Forest Stewardship Council labels are standard now,’ he says. The quality of recycled stocks and vegetable inks are so good, according to Susanna Cook of Allies Design, that the consultancy uses them exclusively.

The FSC UK introduced a simplified set of labels last year, with this month marking the deadline for all certified suppliers to adopt them. The three labels – FSC 100 per cent, FSC Mix and FSC Recycled – denote a responsible chain of custody, yet despite the existence of a 100 per cent FSC label, there is no product that yet carries it. ‘This is mainly down to how rapidly forests can be certified,’ says Whellens, ‘but the ideal scenario for me is still 100 per cent post-consumer recycled paper. It’s a better route than achieving 100 per cent FSC virgin fibres.’

WWF launched a valuable tool in January, Check Your Paper, that assesses all aspects of a paper product’s environmental quality, ranging from forestry management and recycling to the emissions, waste and water pollution from the mills. ‘It’s an easy-to-use star rating system with the ratification of a respected body, so designers should direct their printers to it,’ says Caroline Clark of Lovely As a Tree, a site dedicated to sustainable graphic design.

‘Carbon-balanced is now the watchword for paper,’ says Sophie Thomas of Thomas Matthews. This involves carbon off-setting, with resulting funds used to support schemes such as the World Land Trust, which works to reduce emissions from deforestation and forest degradation. Howard Smith Paper Group offers a carbon-balanced range. ‘Carbon-balanced products should be used in tandem with recycled stocks, chain of custody certification from FSC or the Programme for the Endorsement of Forest Certification schemes and adoption of ISO 14001 environmental standards by printers,’ says Thomas. Ultimately the best strategy is reduction, Clark adds. ‘Trying to use less, choosing lighter weights and making documents smaller all have an impact.’

Trying to use less [paper], choosing lighter weights and making documents smaller all have an impact

On the printing side, the performance of HP Indigo 7000 Presses now means that digital printing offers sustainability gains at comparative quality to traditional methods, says Richard Owers, director of Pureprint. ‘Paper waste with digital printing is much lower, cutting the figure from 25 per cent waste to just 7 per cent. Also, because you’re running less paper, energy use is much lower,’ says Owers. More gains in sustainability result from the affordability of short runs, enabling clients to avoid overprinting stock that ends up being pulped. ‘Because digital print quality has improved so dramatically, and costs less than off-set litho, it becomes a catalyst for creativity,’ Owers says. ‘Designers and clients are amazed at the quality we’re able to show them, and it gives them scope to use designs that would previously have been prohibitive.’

Not everyone endorses the sustainability of digital print, however. According to Ingede, an industry association for de-inking – which concerns the removal of ink in the recycling process – digital inks pose a problem for recycling, since they are not easily washed out of paper fibres. Because of these difficulties, the quantity of recycled stocks, as they are presently produced, could be hampered by the rise in digital printing.

Improvements to soya- and linseed-based inks continue to challenge mineral oil versions derived from petrochemicals, which were at the centre of a recent food scare around cereal packaging contaminating its contents. Cobalt-free vegetable inks that leave out harmful drying agents are a welcome development, according to Whellens. A job may have to be left to dry on the press for a day longer, he admits, but this is the trade-off. ‘Designers must educate their clients about these decisions,’ he says.

For designers, finding a trustworthy, knowledgeable printer is key to maintaining a sustainable edge. ‘We really rely on our printer to discuss with us what papers and inks we can use,’ says Marine Schepens, studio manager at Allies Design. Lovely As a Tree features an online directory of responsible printing firms. In turn, printers look to their suppliers for sound environmental practices, and choosing those with stringent environmental management policies such as ISO 14001 makes a big difference.

Mandy Haggith’s influential book Paper Trails claimed in 2008 that paper could become the first commodity industry to become sustainable. It would entail a doubling of recycling and a halving of paper use. In print terms, this means designers must keep rethinking the way they specify paper, and use print more tactically, alongside other media. Says Whellens, ‘That wisdom is filtering through.’ 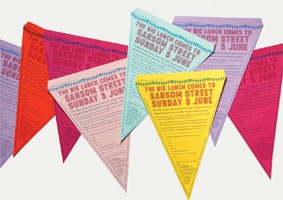 Caroline Clark Design demonstrates a very simple but effective form of sustainable graphic design, in which the consultancy reuses a leaflet designed to advertise a street party as bunting. 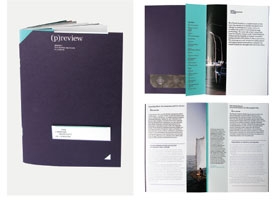 The Finnish Institute in London 2010/2011 Brochure

The Finnish Institute in London recently launched its 2010/2011 brochure, with design by Studio Emmi. While the Institute did make mention of sustainability in its brief, Studio Emmi took its responsibilities further than the client demanded.

At every stage of its production, Studio Emmi has considered sustainability, starting with choosing a standard, A5 paper size, ’which allows you to optimise the use of paper’, according to founder Emmi Salonen.

Salonen selected printer Geoff Neal Litho, which uses vegetable-based inks and claims to be a carbon-neutral company, boasting both FSC and ISO 14001 certification. The printer is also a London-based firm, making it local to both the Institute and Studio Emmi, ’which cuts down on petrol needed for distribution’, says Salonen.

Printed on GS Smith’s Colourplan and the Paper Company’s Vanguard and Lumisilk, the outer pages are produced using just one colour – Pantone black, rather than CMYK, which is only used on the inner pages.

While Salonen applies Green principles to every project she does, she admits that sometimes she has to make compromises on sustainability, ’such as when a brochure or book is perfect bound – the glues can make it hard to recycle. You just have to go with what you can for each job,’ she says.

Salonen hopes that people cannot tell by looking at her work that it is made using sustainable materials and processes, preferring that such information is only revealed upon investigation. In fact, she thinks that, ’Having just one ink in the outer pages makes the brochure look really nice. No one could think that it is anything to do with environmental savings.’