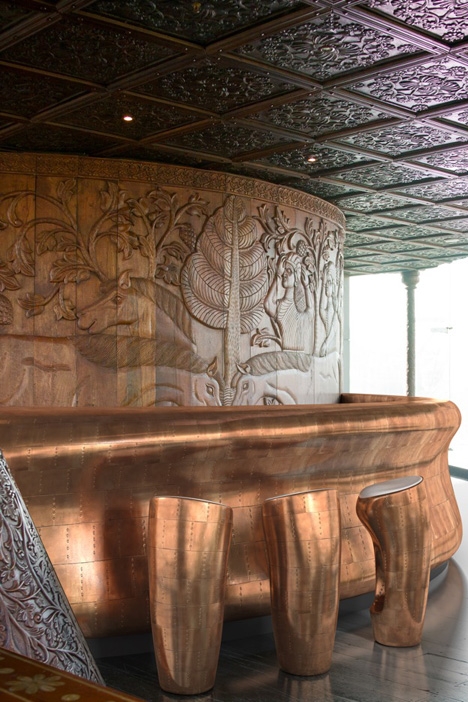 The consultancy was appointed to the work by Diageo, which owns the Ketel One Vodka brand and a stable of ‘reserve brands’ including Johnnie Walker.

Jenner Studio has been appointed on the strength of the interior concept it developed for the Johnnie Walker Blue Label Terrace at restaurant Plateau in London.

Dutch vodka brand Ketel One is named after the copper distillery kettle it was first produced in, in 1691, ‘Distilleerketel One’.

Jenner Studio founder Christopher Jenner has taken this story and fed it into the design concept, trying to ‘capture the relationship between the craft of vodka-making and that of a master metal craftsman,’ he says.

The branded bar ‘communicates the shape of the distillery kettle’ and has been constructed by heating vertical copper strips individually, which are made malleable and riveted to a wooden and metal skeleton. Copper sheets are then riveted and finally a seamless copper surface with no edges is overlaid, says Jenner.

The bar has been formed in an ‘ergonomic tear drop, which is a difficult architectural shape,’ adds Jenner, who has designed the bar to fit the curvature of the space.

More than 1000kg of copper and 10,000 rivets have been used on the bar and stalls, which have taken craftsmen six weeks to build.

The Gilgamesh design throughout the restaurant space features Indian wood carvings based around the story of Gilgamesh – the first king of Babylon.

Jenner says he had to make sure the two design stories did not appear at odds with each other, ‘so used materials which didn’t clash’.

He is now in talks with the restaurant over the design of a potential private members club on the third floor of the Gilgamesh restaurant.