Japanese car manufacturer Mazda has faced some tough decisions on the direction of its future in recent years and opted to try and design its way out of trouble.

In 2008, US car giant Ford diluted its majority share holding in the company from 33 to 13%, leaving Mazda in limbo but in control of its own destiny.

By 2010, it had conceived a design philosophy known as Kodo – Soul of Motion, which framed a way of thinking around physical form based on the movement of animals.

Kodo has since developed and now concerns itself with “simplicity” and “elegance,” according to Mazda European design director Kevin Rice.

We caught up with Rice at the Tokyo motor show where he told us that Mazda’s design philosophy recognises the disconnect between busy modern Japanese consumer culture and the uncomplicated beauty associated with Japan’s past, such as that found in historical Japanese gardens and haiku poetry. 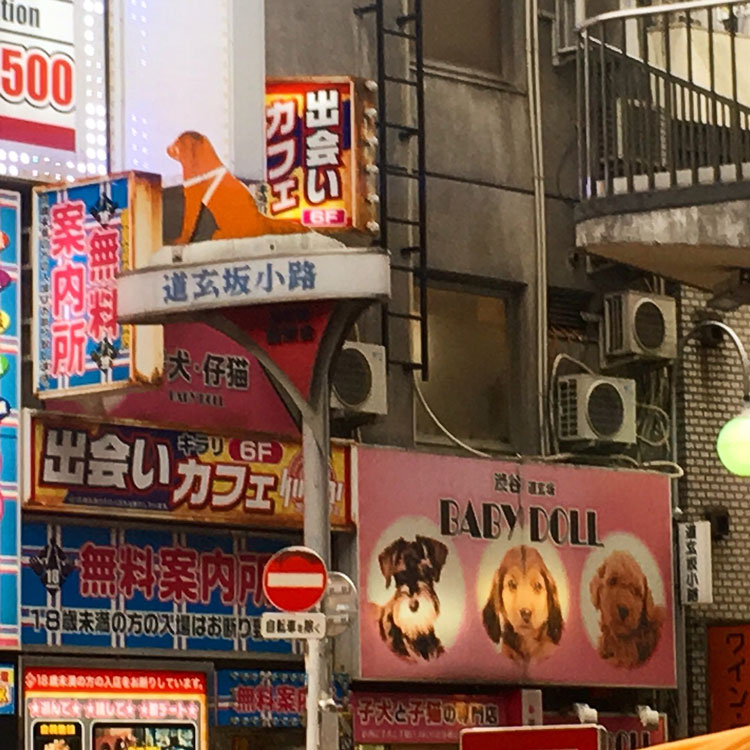 You only have to look at the streets of Tokyo to witness a seductive panorama of kitsch neon consumerism.

Rice says that the two concept cars Mazda unveiled at the Tokyo motor show are the antithesis of this busy look and feel – although the new designs also feel like a reaction to clutter and over-design in the car industry as a whole. 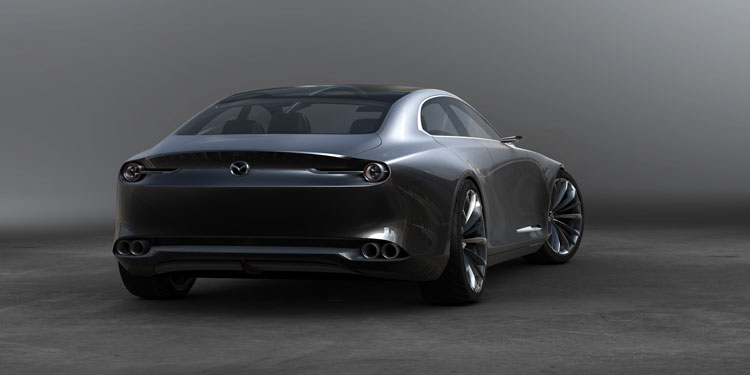 The bolder of the two concepts is the Vision Coupe. “It is distinctively elegant, combining a pure and simple Japanese aesthetic with these animal-inspired forms,” says Rice.

This form combination is a balancing act, he adds. “If you put either too much energy or sculpture into it, it loses its simplicity and beauty.” 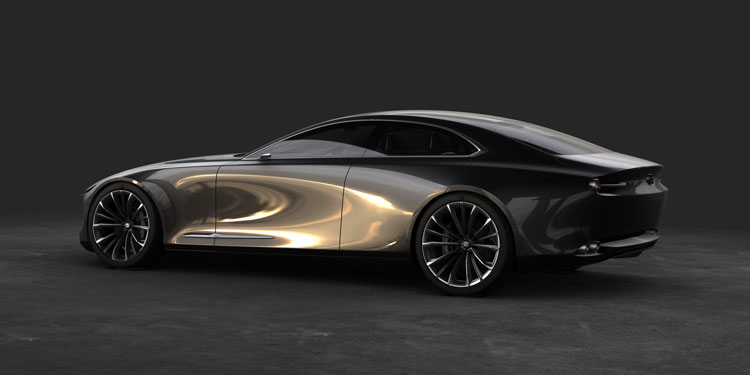 Form-wise the most noticeable part of the car is its concave door, designed to dramatically reflect light.

“Right at the beginning when we were in the clay modelling phase, the engineers came to us with suggestions of how they could change production processes to accommodate the design,” says Rice, who believes the processes developed are particular to Mazda.

“With such a big negative surface it’s so much more critical to control reflections so we started the process in clay by hand before scanning it, simulating the reflections in a computer, tuning those, simulating it again and repeating the whole thing in a never-ending cycle,” he says.

The Mazda Kai – the second car to be unveiled – also takes on the Kodo design language, including the distinctive concave side panels. The compact car is seen as a more realistic production prospect and elements of it are likely to be seen trickling down to Mazda’s next generation Mazda 3 hatchback.

While interior, furniture, product and even interface design have erred towards simplicity in recent times, arguably car design has not. Perhaps the next generation of cars on the road will.

The Honda Urban EV concepts launched at the Frankfurt motor show and shown again at the Tokyo motor show are set to launch in 2019.

Their glowing interface grills and clean, white futuristic exterior – which also borrow from the form of a 1970s hatchback – give way to an interior featuring a soft, grey front bench seat, cushions and a thick carpet.

The future focus of the car industry is by-and-large autonomous driving and electric cars – the latter being backed more and more vociferously by governments.

Meanwhile hydrogen-powered car infrastructure is comparatively underfunded at a government level in the UK.

In countries like the UK, where around 40% of power stations are fuelled by gas, the short-term effectiveness of electric is questionable, in a landscape where currently around 23% of all power produced is renewable.

The global picture is complicated with Norway – where renewable power is prominent – planning to ban the sale of new petrol and diesel cars as soon as 2025. The UK has set a date of 2040. Meanwhile France, the Netherlands, India and most recently China, have made similar pledges to no longer sell petrol or diesel cars in coming decades.

Together, governments and car manufacturers will dictate the direction that car design takes and as renewable power becomes more prevalent there will likely be a shift towards electric vehicle ownership.

Mazda will not completely eschew electric car development, with hybrid and electric power playing some part in its future.

“Electric vehicles are somewhat of a craze”

However the short to medium-term future of the company is making petrol and diesel engines more efficient. Last month, Mazda unveiled its Skyactiv X engine – set to launch in 2019 – which eliminates the need for spark plugs, and Mazda claims will be 30% more efficient than its current petrol engines.

“Electric vehicles are somewhat of a craze,” says Rice. “Our research shows us that in 10-20 years’ time there will be a mix of vehicle types – fossil fuel – powered, hybrid and electric.

“Mazda will look at all three of those but we need to make sure that the internal combustion engine can be optimised to an absolute maximum. We’re taking a pragmatic view.”

In terms of form, Mazda has wedded itself to the ideas of elegance and simplicity and, aesthetically speaking, the company is achieving that. In terms of functionality the future of the company will continue to be about driving experience and this seems to hold more value than electric vehicle development or autonomous driving for Mazda.

“We’ll assist drivers but not take over”

Rice is quite explicit on this. While he concedes that “autonomous vehicles will play an important part in society,” he adds: “We want our drivers to have an emotional attachment to the vehicle and enjoy the pleasure of driving. Rather than autonomous vehicles we would like to champion driver-assisted systems so that, should a driver lose control, we’ll assist them but not take over.”

The true picture of autonomous vehicles remains unclear. Will they play a real role in smart, connected cities and when will they come to pass?

It is also uncertain who will make and design them. The traditional motoring industry is being challenged by new players like Tesla, which has a strong interest in autonomous driving, as does Google project Waymo, which is dedicated to developing an autonomous vehicle.

Just last month Dyson entered the electric car race and while traditional motoring manufacturers are working on their own projects there have been few major collaborations between a household tech brand and a car manufacturer.

New car companies have “no relation to history of car design”

“I don’t think we’ve had a more exciting time in terms of tech shift in the car industry,” says Rice. “There were big design steps in every decade since the 50s, like aerodynamic development in the 1980s, but nothing like this.”

He adds: “Now autonomous and electric cars are being developed by players who have no relation to the history of car design and production. It will add to the mix so can only be a good thing – whether that’s inspiring and pushing the car industry or teaching it new approaches.”

Car giants have subsumed each other over the last 20 years but now there is a newly competitive car design industry. There is also fierce competition to become a car designer but this may simply be a supply and demand issue.

“Universities are sending out too many graduates”

“A word of warning”, says Rice. “If you want to be a car designer today you’ll have to be at the top of your game. UK universities are sending out so many graduates that there just aren’t enough jobs in the car industry.”

Rice feels that students are being failed by universities, which are “not preparing students for jobs properly” and “giving them false expectations that they’ll get a job”. He says: “I imagine there are 200-300 students coming out of the UK alone every year and there are loads of great schools in France, Germany and Slovakia. The industry just can’t take them.”

For context, the entire Mazda design team – which is relatively small –  has around 20-25 in Frankfurt, 20-25 in the US and not more than 100 at the design headquarters in Hiroshima, Japan.

Being a car designer is not a “casual job” says Rice, who adds, “If you do have a real passion you’ll succeed; but start sketching young.”

Monotype launches app that identifies typefaces in world around us

How New Boosbeck is teaching unemployed people to make furniture