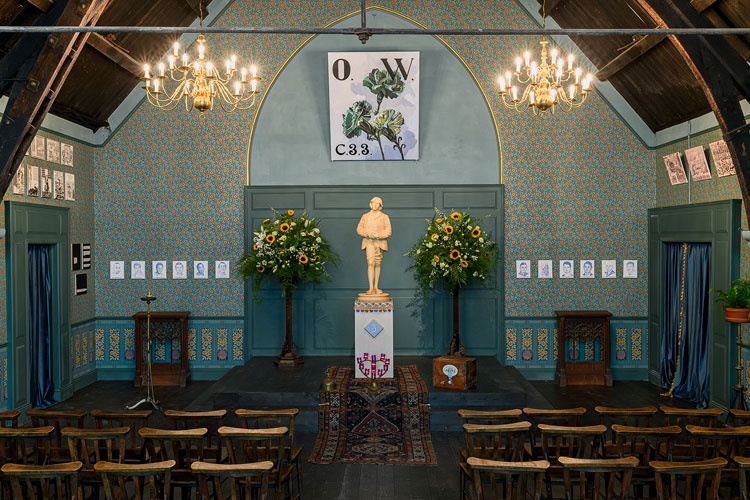 Update 1 March 2019: The Oscar Wilde Temple exhibition has been extended to 28 April 2019, due to “unprecedented demand from the LGBTQ+ community” for events and ceremonies at the venue, according to Studio Voltaire.

To date, more than 50 events have been held in the space, ranging from LGBTQ+ coffee mornings to queer faith gatherings, with the venue’s first wedding scheduled to take place in April.

An Oscar Wilde Temple has been opened as both an immersive installation which commemorates members of the LGBTQ+ community, and a functional secular “safe space”.

Artists David McDermott and Peter McGough are behind the piece at Studio Voltaire gallery in Clapham, South London, which has been transformed to look like a Victorian church with an Arts and Crafts movement look and feel.

The installation, which incorporates a series of artworks and sculptures by the duo, has been curated by Alison M. Gingeras, in partnership with Studio Voltaire.

The gallery, which is inside a former Methodist chapel with an existing wooden beamed roof and church windows has been kitted out with all the elements of a functioning church, in its “most ambitious” project to date.

Nicola Wright, exhibitions curator at Studio Voltaire who helped bring the project to life, says: “I think one of the central things for Peter and David and us in staging this show is that this can really be a place for contemplation and remembrance and that it is a safe space for anyone who identifies with the LGBTQ+ community. 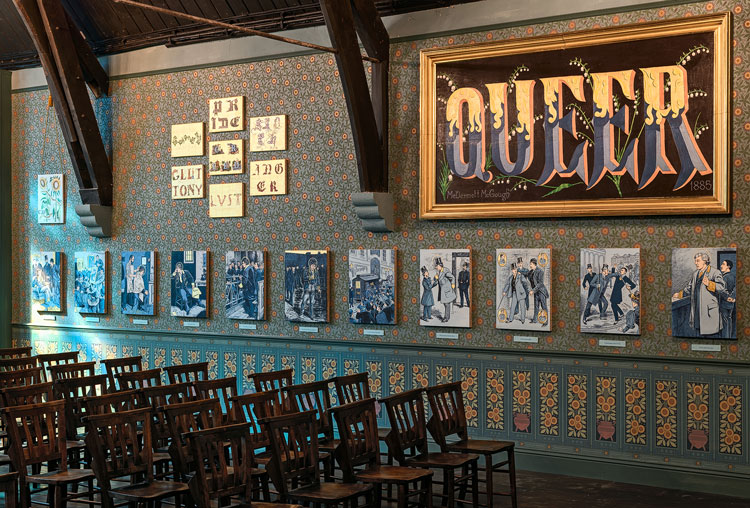 “It is an incredible installation and the works are hugely important but we are opening it as a functional space.”

The art within the chapel includes a wide range of works by McDermott and McGough, who have been working together since the early 1980s, often re-imagining history in the light of LGBTQ+-focused narratives.

The pair are known for past works such as a “time machine” project which they carried out in downtown New York, in the 1980s, transforming their whole existence into their version of the Victorian era.

Wright says: “Everything was faithful to that period. They lived dressed in late Victorian clothes, they lived in an incredible townhouse that they transformed into a Victorian gentleman’s house, they stripped out the electrics and drove antique vintage cars, they committed themselves to living in this way, in this time capsule of a world.

“This is their very first presentation anywhere in the UK”, Wright says. 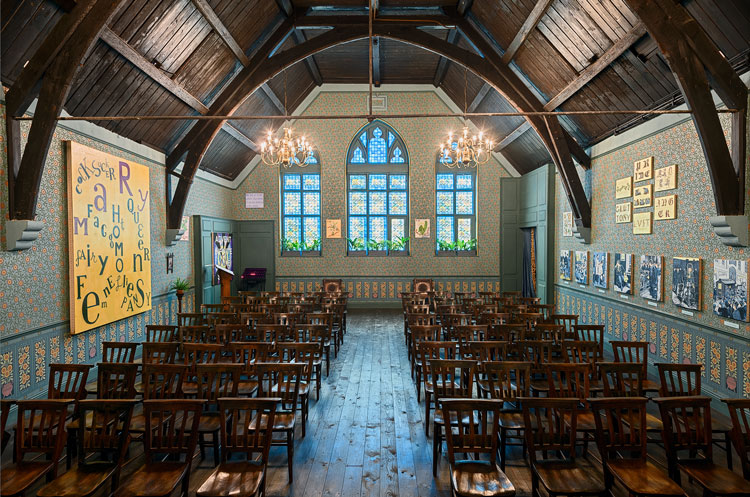 This installation pays homage to Oscar Wilde, covering his story, but also presents works linked with the LGBTQ+ community in a wider sense.

Wright explains that the work is partly based on “an idea David [McDermott] had of wanting to start a new religion that was open to queer voices and the LGBTQ+ community.

“For them Oscar Wilde is a very high-profile person to have been prosecuted for their sexuality, he became a perfect martyr, a perfect figure tor this this new idea. The temple is a physical embodiment of that idea.”

Wooden flooring has replaced the former concrete base and custom sunflower-themed wallpaper – a flower associated with Oscar Wilde – has been put up.

“Stained glass” windows made with a printable gel and featuring green carnations have been installed and rows of wooden chairs have been placed before the alter. 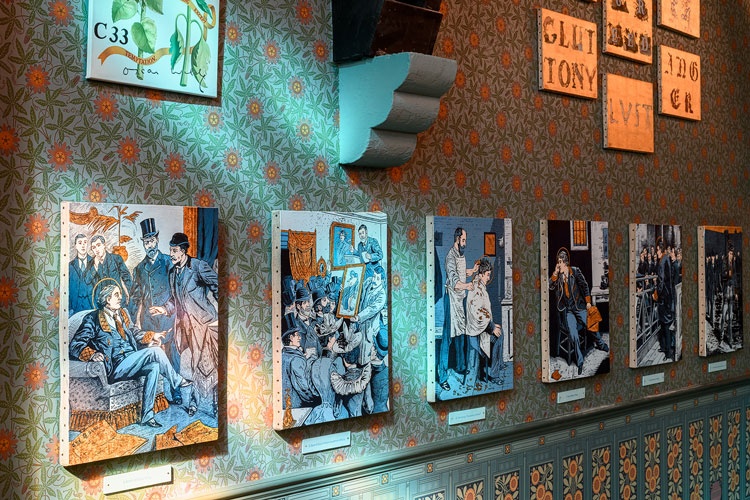 “The idea took inspiration from the Aesthetic movement which is something Oscar Wilde championed,” Wright says.

Various symbols associated either with Wilde or with the LGBTQ+ community appear throughout, such as the green carnation.

Wright says: “On the opening night of Lady Windermere’s Fan on the Victorian stage, Oscar Wilde had the lead actor and a group of people in the audience to wear a green carnation in their button hole.” The symbol is often associated with being a gay man.

A Lindewood statue of Oscar Wilde stands on the alter “as a sort of deity”.

The Stations of Reading Gaol features 12 paintings which tell the story of Oscar Wilde including his arrest and his time in prison. 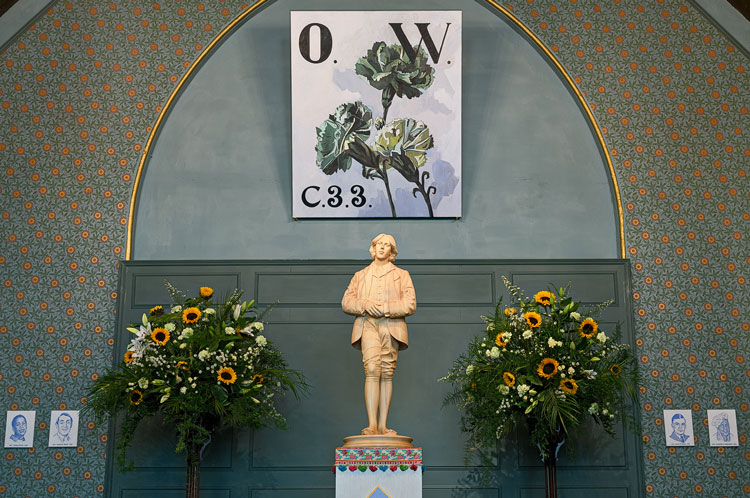 A second series of work which features portraits of people the artists “identified as martyrs”.
“It is people form LGBT history who were all killed because of their sexuality,” Wright says.

“Some are quite famous, such as [codebreaker] Alan Turing and Harvey Milk who was the first openly gay elected official in California.

“But some are less well known such as a young girl called Sakia Gunn.”

Gunn was killed in a New Jersey street in 2003 after rejecting the advances of two men and telling them she was a lesbian.

Another major work in the “temple” is a chantry to those who have died from HIV and AIDs along with a book of remembrance which people are invited to write in to pay tribute to lost loved ones. 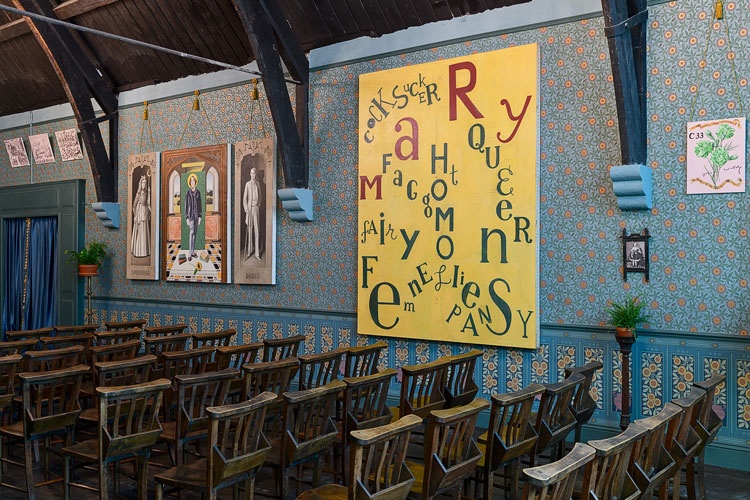 People are invited to hire out the space to use it for a range of ceremonies such as LGBTQ+ marriages, vow renewals and other occasions.

They have also put out an open call for LGBTQ+ groups come and use it as a meeting space.

Proceeds will go to the Albert Kennedy Trust, a leading homelessness charity for LGBTQ+ youths.

The charity will also be holding a series of workshops, events and mentoring in the space.

The Oscar Wilde Temple at Studio Voltaire, 1A Nelsons Row, Clapham, London SW4 7JR is free to visit and will be open until 31 March. For more information or to book the space, head here.

5 design things to look out for in October 2018