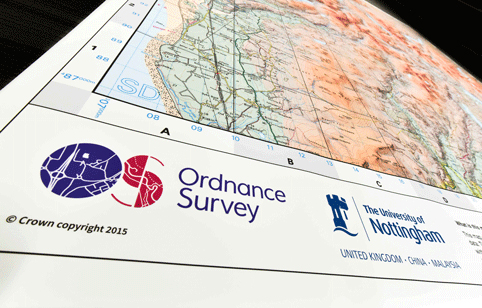 1. Ordnance Survey has been rebranded OS in a project led by Other, which has looked to evocate the company’s position as a modern big data organisation.

2. Brandopus has rebranded cycling retailer Wiggle, introducing a new icon, colourways and wordmark in a bid to better communicate that Wiggle represents “a love of sport”.

3. Japanese designer Kenji Ekuan, whose works include a bullet train and the red-capped Kikkoman soy sauce bottle, has died at the age of 85.

MT ”@AdrianWestaway: Great speech by @AngusMontgomery at #DesignVentura awards – design will save the world!” If kids all become designers!

There are lots of lovely works in the V&A’s touring exhibition Posters of Protest and Revolution, including this one by Aida Wild.

“Few industrial designers have found their way into so many millions of households across the globe. But from Mexico to Shanghai, Ekuan’s Kikkoman soy sauce bottle is instantly recognisable and embodies simple, elegant, intelligent design.” PriestmanGoode co-founder Paul Priestman is among those who pay tribute to Japanese designer Kenji Ekuan.

The Guardian takes a look at how to become a greetings card designer.

Nissan has unveiled a glow-in-the-dark car. The Daily Mail takes a look.

Indonesia could lose the right to host the 2018 Asian Games unless its main sporting body changes a logo that includes the Olympic rings, reports Yahoo.

Pick Me Up prepares to return

Why parents should aspire for their children to be designers