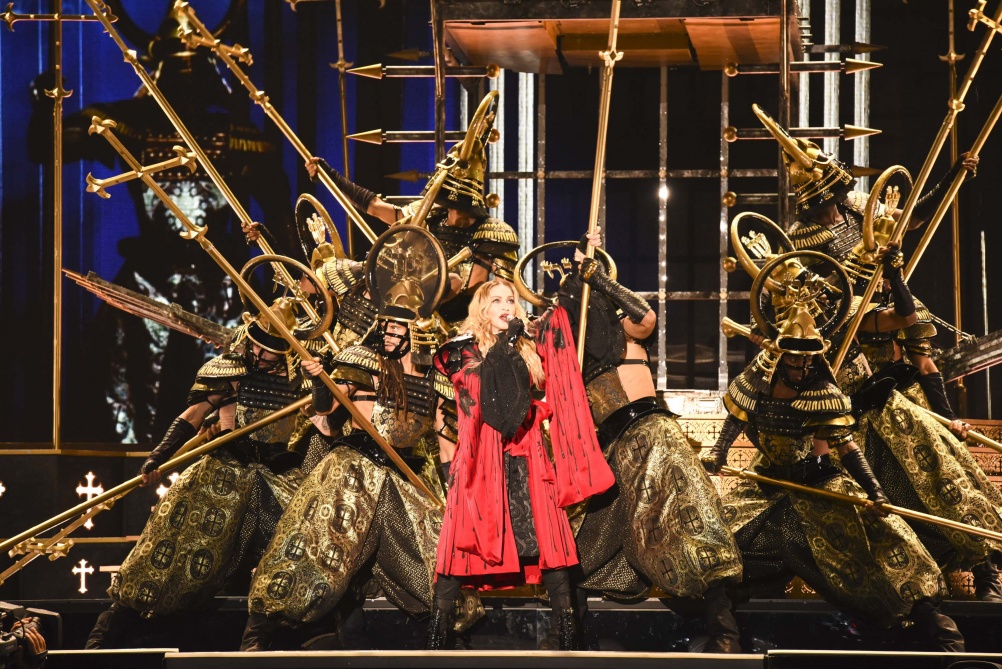 The entertainment architect works on large-scale public events and concerts – anyone from HM The Queen to the band Queen. Both are real clients.

Stufish began speaking to Madonna and her creative director Jamie King, in January. After a set of 25 songs was agreed, Stufish looked to find a creative solution to evocate the show’s Rebel Heart theme. 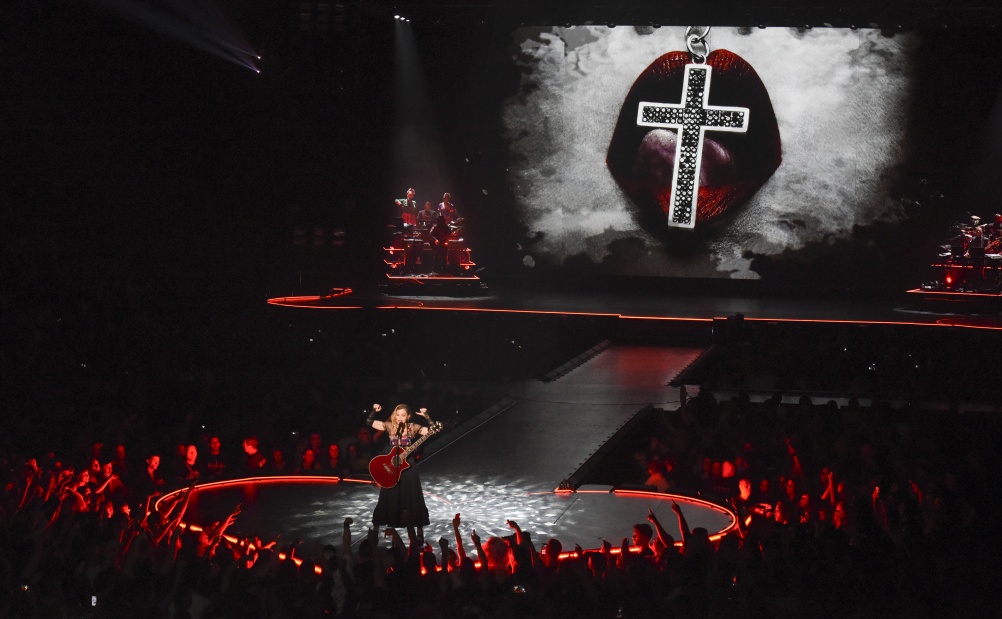 A core idea was soon developed; a stage, which abuts a runway bearing a resemblance to an arrow or a cross, with a heart at one end.

The heart also looks “a bit like a penis” according to Stufish designer Ric Lipson, who says: “Madonna even made a joke about it last night when she said that hearts and penises are clearly very linked and this is God’s way of setting her life in motion.”

Below stage is an “Unglamorous world”

Lipson takes us down below stage level, a distinctly “unglamorous world” less than 1.8m tall where dancers get changed in spaces where they can barely stand up, props are assembled and together performers and props are pushed up onto the stage above them, often on hydraulic lifts.

There’s something rather gladiatorial about this subterranean area, which is the footprint beneath the stage rather than back-stage. It’s a maze of tunnels, wires and props interrupted only by platforms poised to send performers up into the light.

Madonna herself is subject to the same conditions and uses a flat trolley on coasters and rails to be transported quickly from one end of the stage to the other.

She even has a tiny makeshift dressing room for what Lipson calls “pit stop costume changes” at one end, where hair, make-up and costume people can pounce on her.

Most of the show is powered by what Lipson calls The Machine, a device constructed by Tait to be the engine of the show.

It’s an 8.5×4.8m screen, which in its flat position sits flush with the stage. It can be walked, jumped and danced on and can rise up 2.5m, pivoting from flat to 90 degrees vertically in 30 seconds. 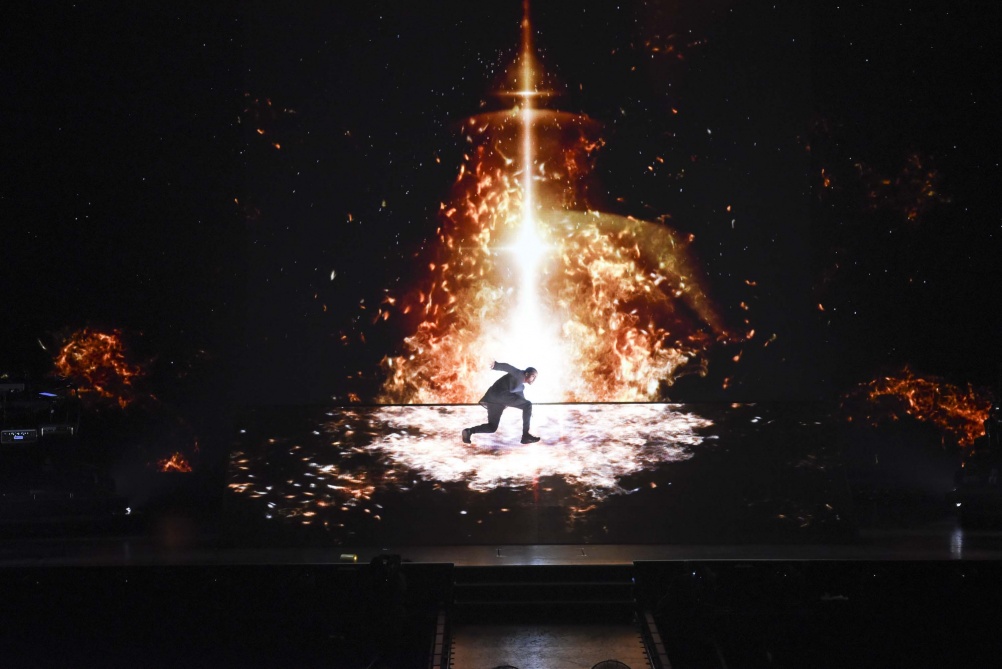 During the show dancers perform on the screen composed of hundreds of LEDs, when it is held at about 45 degrees. A scenic handrail is attached to the top and at one point bungee points on the top edge allow performers to hang free. 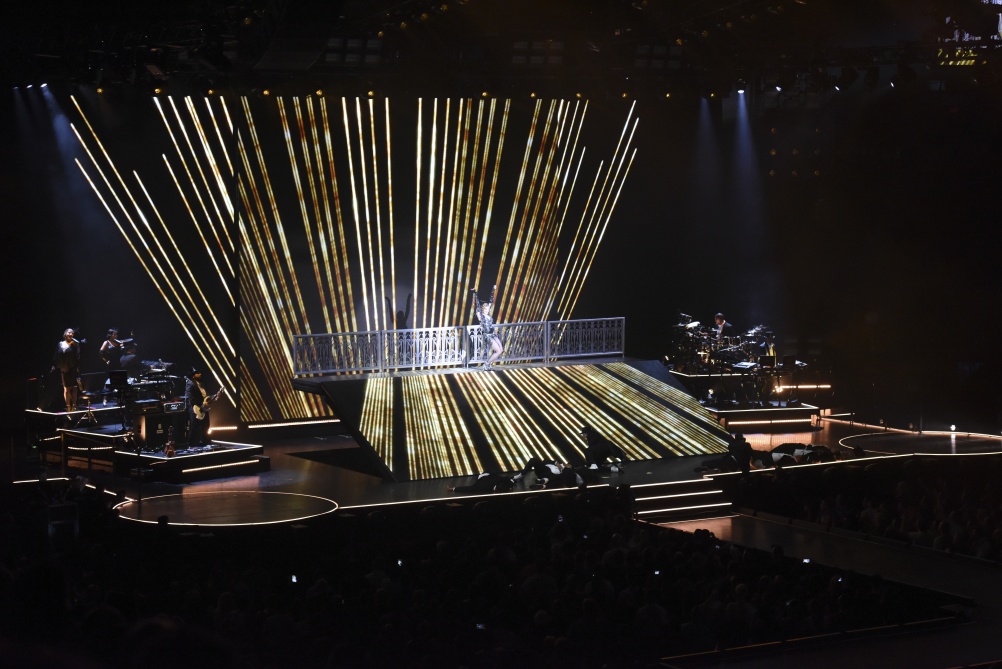 The screen is also used in a slightly more conventional way for video, graphic montages and backdrops. This content has been produced by the studios Moment Factory, Veneno Inc and a host of video directors.

It dovetails with the physical props and together they play on almost every piece of iconography you can think of, religious or otherwise, as the show takes on various cultural themes from around the world and throughout time. Plus lots of sultry, coquettish Madonna imagery. In the spirit of surprise, we won’t give too much away though. 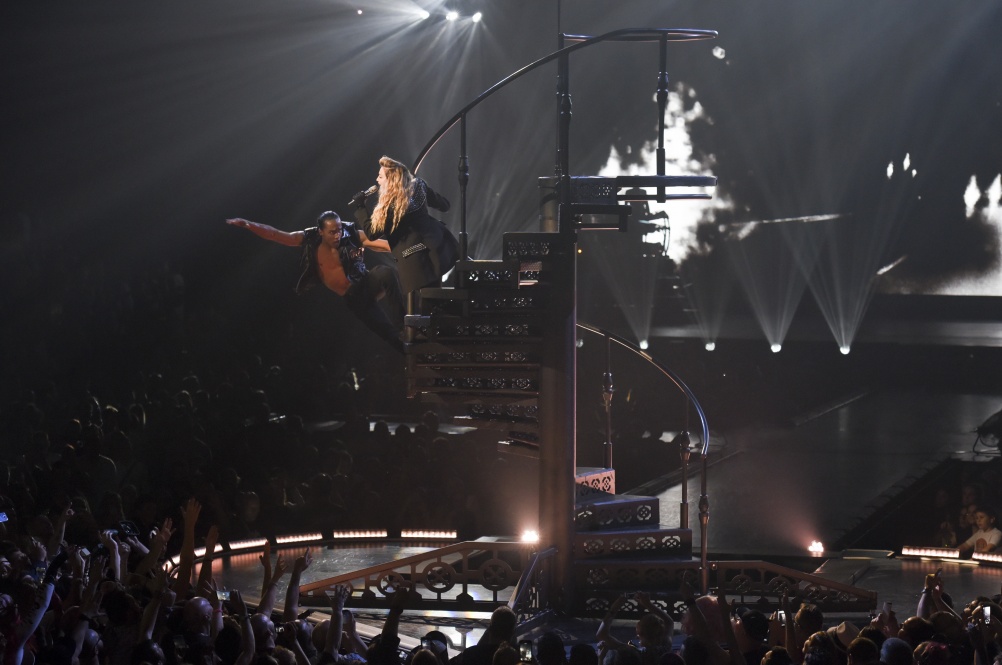 Prop design is a big part of the show. Possibly the most ambitious of these is a 5×2.5m steel spiral staircase initially hidden from view above the stage and lowered down to stage level for Madge to act out a doomed tryst.

Like all of the other props, prototypes are made before the real thing is finalised. “We build a whole mock set before the real thing,” says Lipson, who adds: “The staircase is probably one of the most complicated things we’ve ever built. We mocked it up in one piece, out of steel. You should never use steel, because it’s too heavy and you should never use one piece, because it’s too big, but Madonna got used to how sturdy it was in rehearsals over six weeks. When the aluminium one came it wasn’t as sturdy, so she said, ‘We’ll take the steel one on tour.’ It’s a good example that you should always build the real prop straight away if you can, or you’ll never get away from it otherwise.” 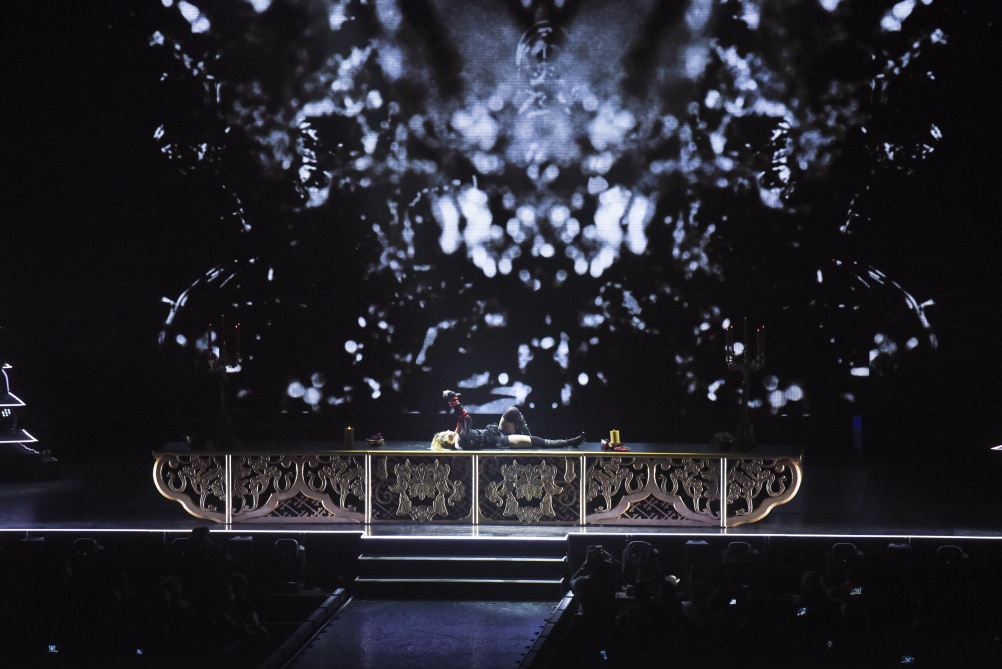 A similar theme is picked up when Madonna and some marauding semi-naked nuns cavort around on giant crosses. One of them has been designed so that the cross bar of the cross can spin, with Madonna on it, while she is casually supported by a gyrating pole dancing nun.

In search of perfection

There is a sense that Lipson and his team have to match Madge’s loosely veiled perfectionism by going in search of perfect design solutions.

For example, the crosses are the result of 17 different prototypes. On the final ones tiny ridges have been embellished so that dancers know which way round they are being held. They are also resprayed gold before every night’s performance to retain their lustre.

“Without sounding negative, every single prop in this show had a problem and went back to prop fabricators. Between it being built as a mock and the real thing, for whatever reason – if it was me, or the vendor or Madonna changing her mind – there was always a new problem to fix. This was not an easy build by any stretch,” says Lipson.

There is a scene near the beginning of the show where Chinese hand fans are used. “Initially we bought 30 fans for three bucks each and then an amazing choreographed dance was made and Madonna said ‘We want dagger fans’ – so we spent $20,000 and six weeks working on this beautiful dagger fan. I knew it would be a problem, because we’d gone from using a plastic fan that weighed nothing to using something that’s made out of plastic and metal, which looks beautiful but is three times as wide. We showed Madonna and she said, ‘I can’t hold this…’”

The whole show is a global tour and has been designed so that its template fits into all of the visited arenas. Lipson says that every effort is made to think sustainably so non-bespoke kit is hired in each location but in total there are 130 touring crew, and at most 24 trucks carrying equipment and three Boeing 747’s. Next stop Amsterdam. 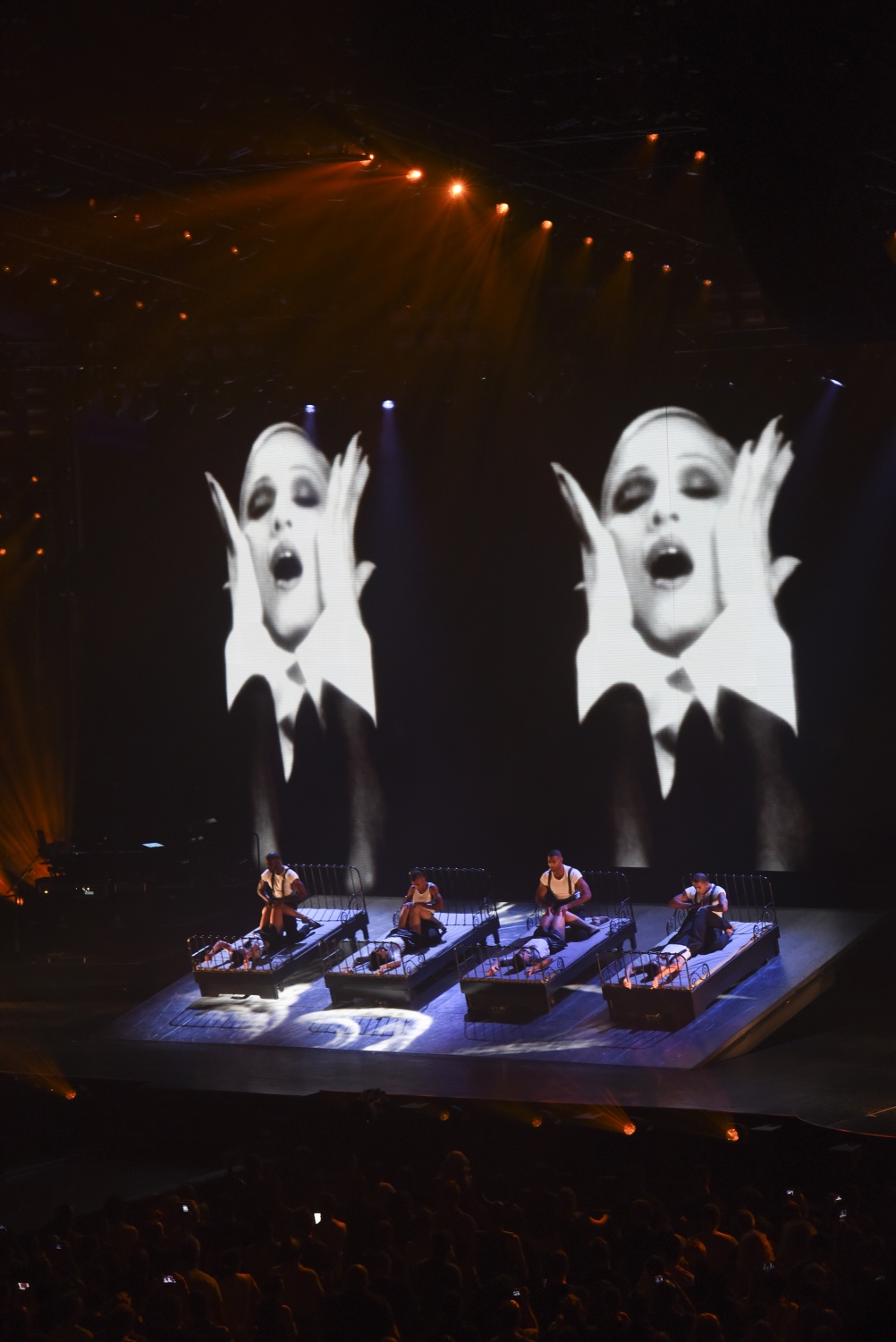 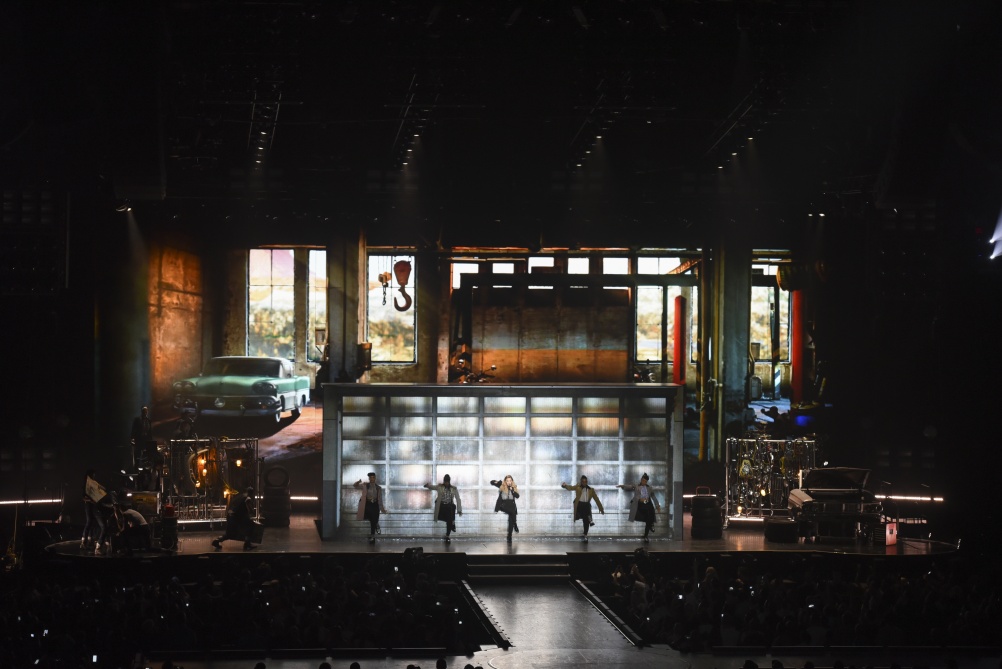 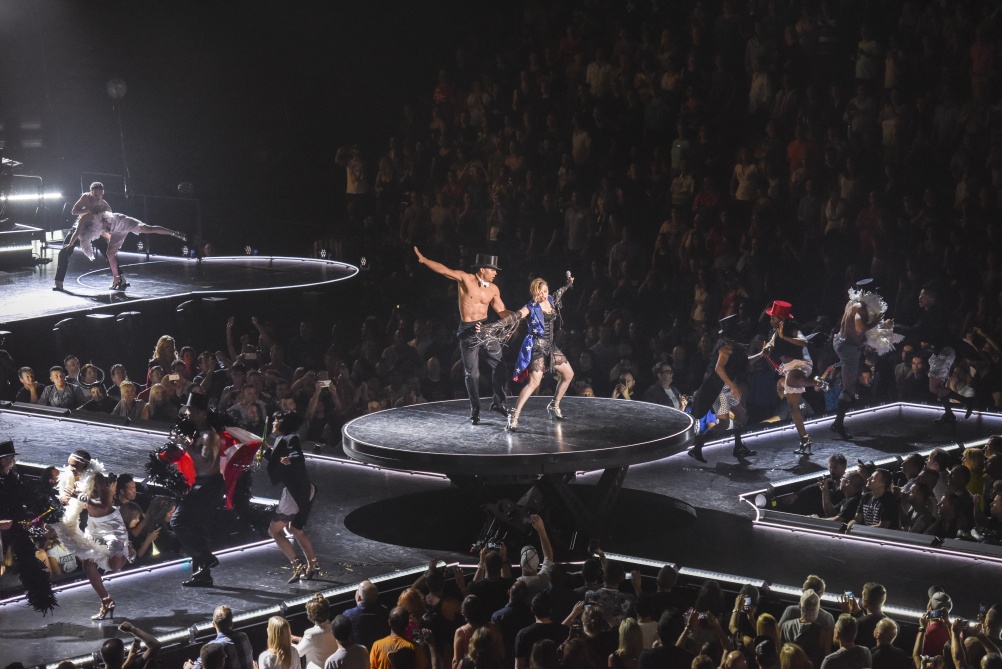 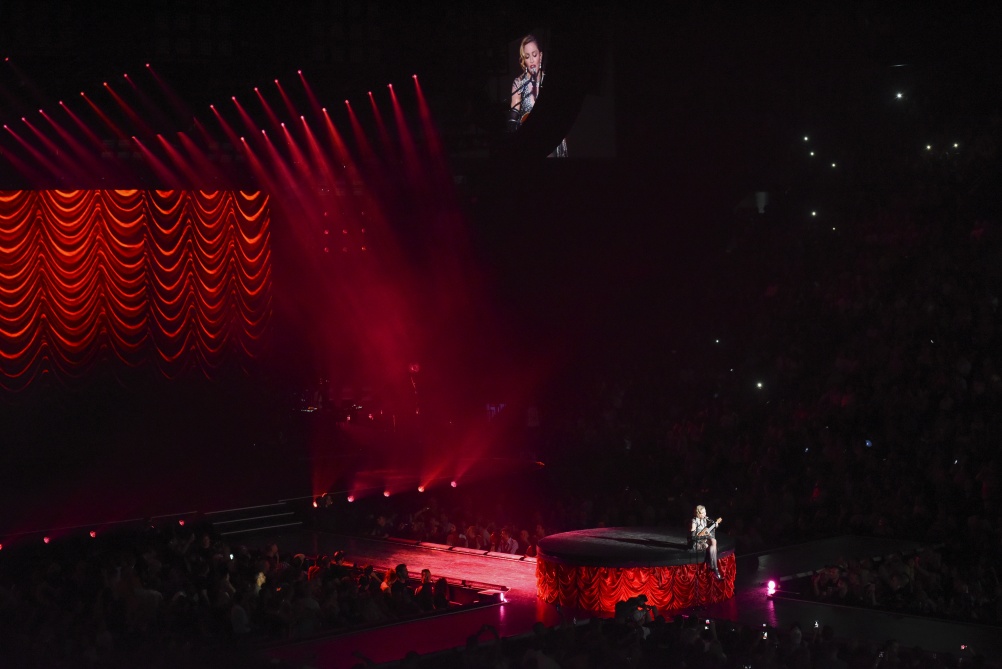 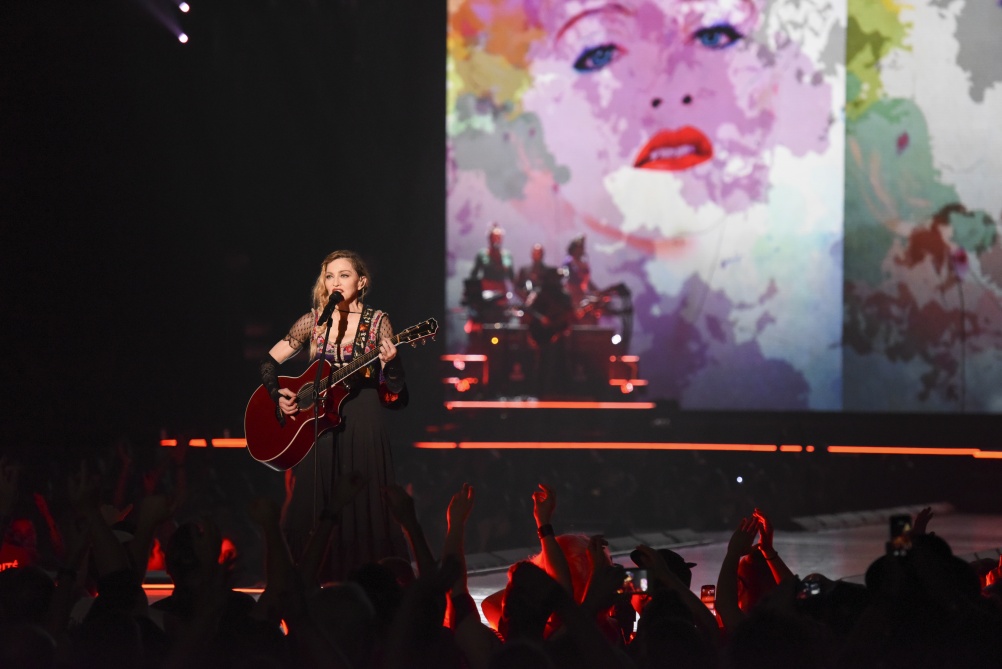 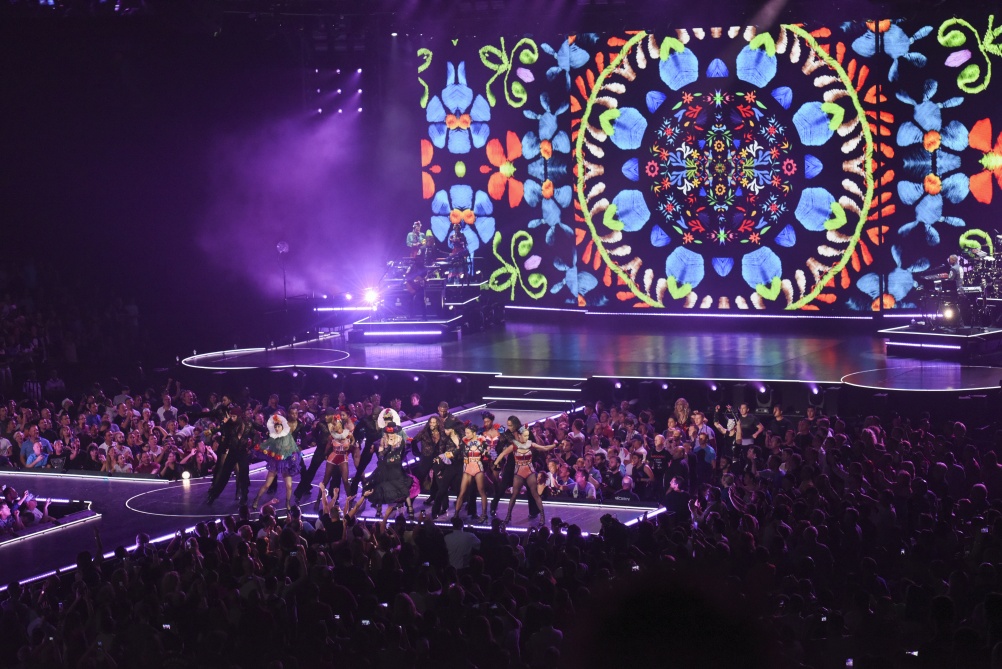 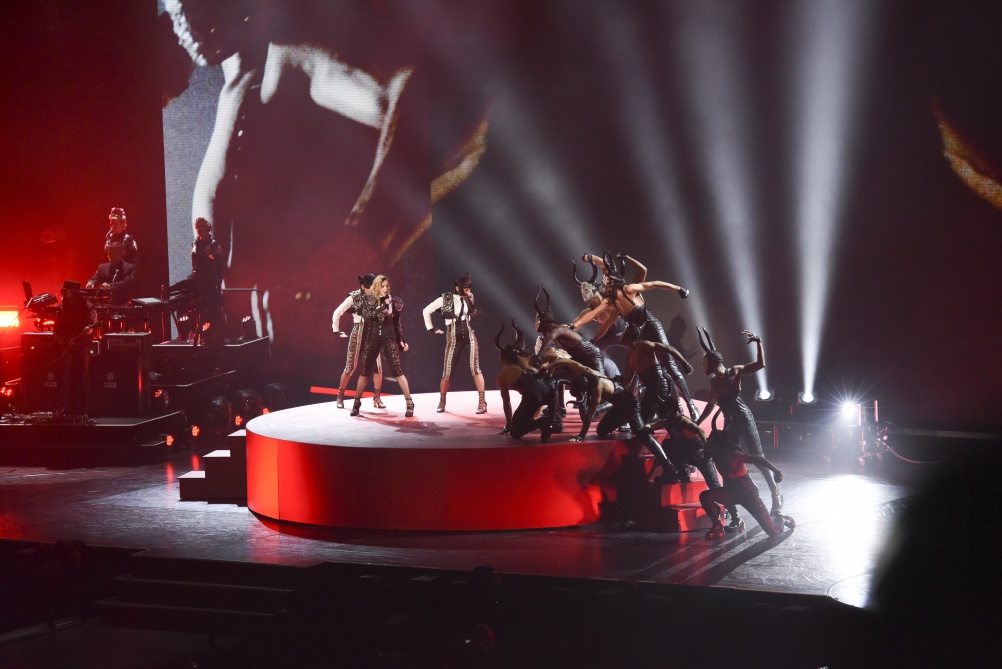 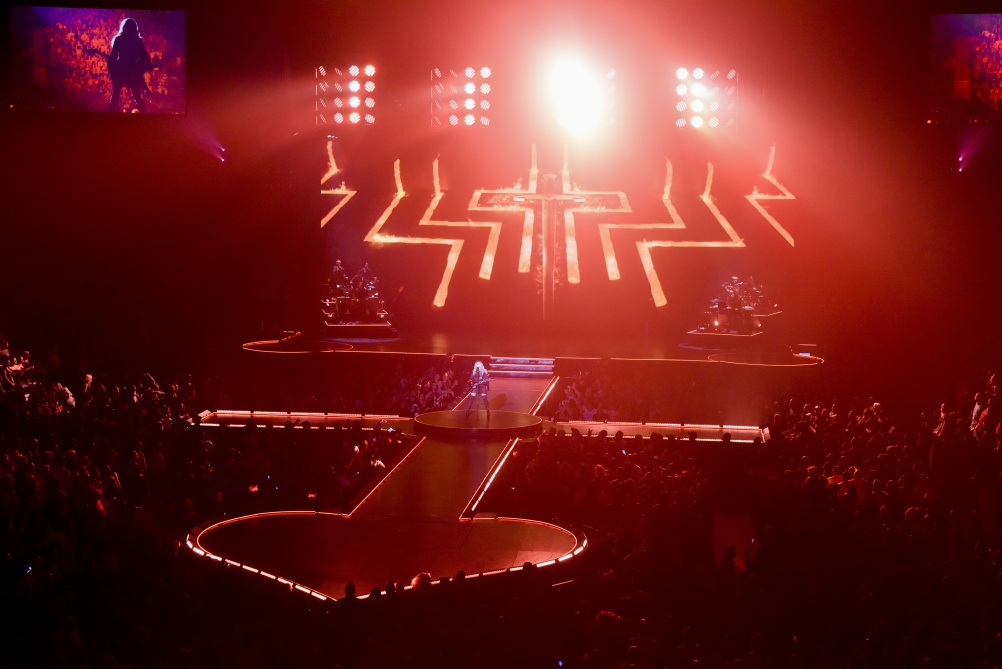 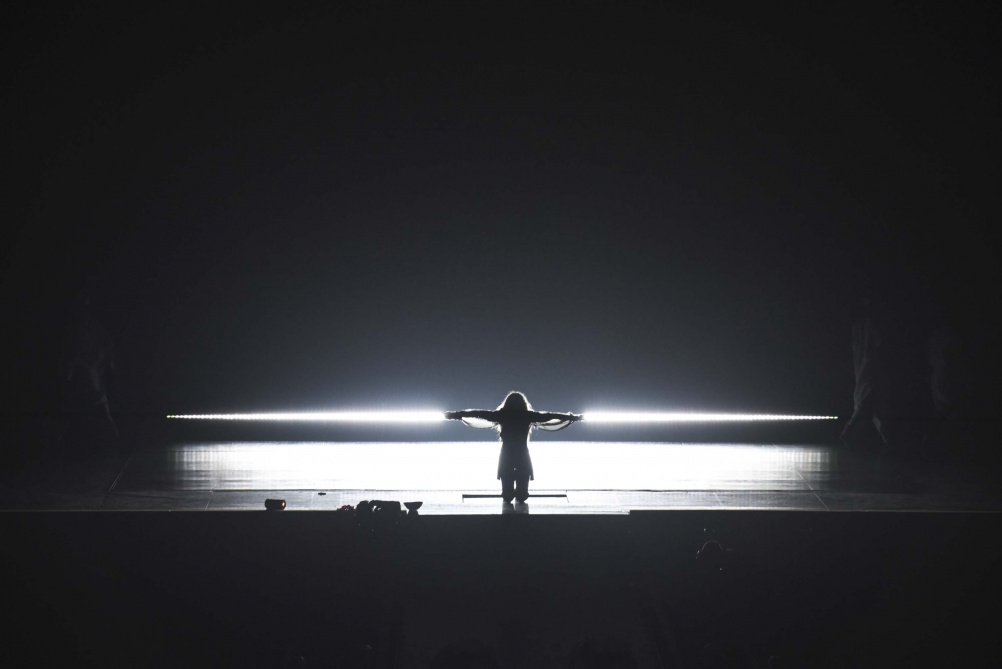