Located in Vienna’s newly developed Austria Campus – a finance and tech hub comparable to London’s Canary Wharf – the latest restaurant in the Max & Benito chain needed to provide a respite from daily business life. London-based Studio Alt Shift was brought in to provide what it calls “a slice of the weekend squeezed into the middle of the working day”.

With the burrito bar offering Californian-style Mexican food, the studio developed a narrative that takes customers on a road trip along the Pacific Coast Highway. The visual language of the space plays on the traditions of such a journey: bright colours and plants reflect the sunshine and greenery, while net curtains give a nod to the diners found along the route.

Alongside these elements, the team has also included a number of “unexpected items”, which reveal further stories. These objects include an oversized windsock, a Kit Kat clock and an octopus-themed beaded curtain. Studio Alt Shift designers Shai Akram and Andrew Haythornthwaite explain the aim was to create a space that felt like it had been put together by a person, rather than a design team; the reason being that this would offer a warmer experience to diners. 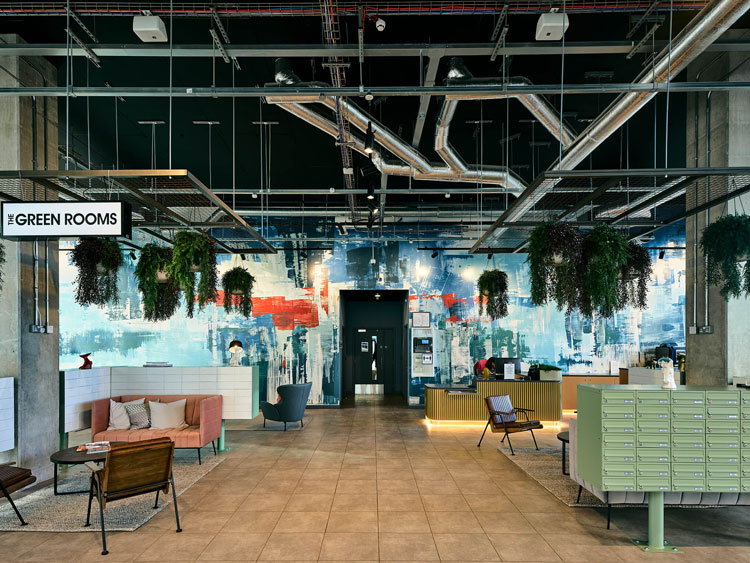 The Green Rooms is a new build-to-rent scheme located in Salford, and Manchester-based interiors consultancy 74 was recently tasked with designing its ground floor amenity spaces. Inspired by its situation within the MediaCityUK development, the 74 team has designed a narrative for the space that reflects local architecture.

Building forms, patterns and lighting have been reinterpreted in the design. Steel panelling and mesh cladding, for example, are used as a nod to the area’s industrial heritage.

It was important also to ensure the “emotional feel” of the space was still domestic. 74 says the aim was to create a “hospitable sanctuary feel”, with studio founder David Holt explaining the balancing processes the studio has employed. Clean lines have been softened with organic shapes and textures, while the “bold and bright” colourways of the furniture are paired with brushed steel and metallic detailing to give an edge.

It’s an extensive project, and includes the interior design of offices, a gym, a gallery and lobby. 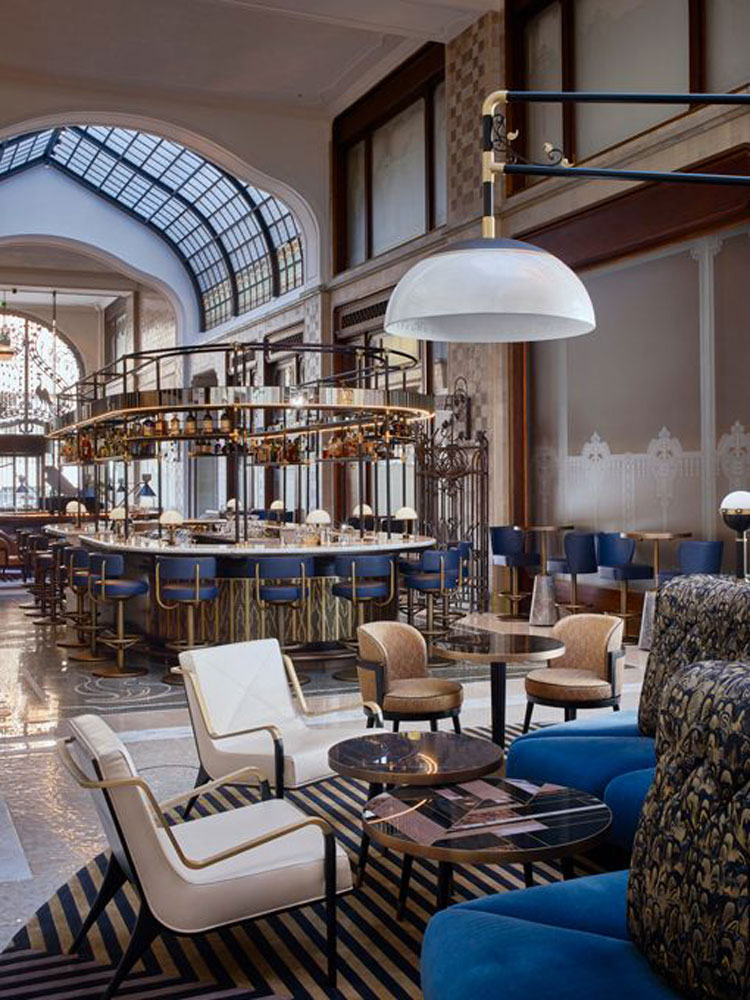 The redesign of the Hungarian-based Four Seasons Gresham Place Budapest lobby reflects a turning point in hotel design, according to hospitality design studio Richmond International. When the hotel was restored in 2004, it was during a time when “public spaces in hotels aspired to be more reverential than multi-functional”, the studio says.

Today it believes the lobby is more than just a space to move through, and Múzsa needed to reflect this. The space has been redesigned as a social hub, providing a place to hold meetings, work, or unwind. The guest journey begins with a banquette lounge seating area by the bar, and this gives way to the main concierge and library area. Within the bar itself, seating is centred around a raised performance space – a tribute to the traditional Budapest hotel bars of the 1910s, known for their theatre.

The aesthetic of the redesign aims to fuse the building’s history with a more contemporary feel. The studio says the look is a “modern yet sympathetic take on Secessionist interior motifs and colour combinations”, with some of the most notable inclusions being large golden lampshades, warm-toned mosaic walls and mirror-finished bar. 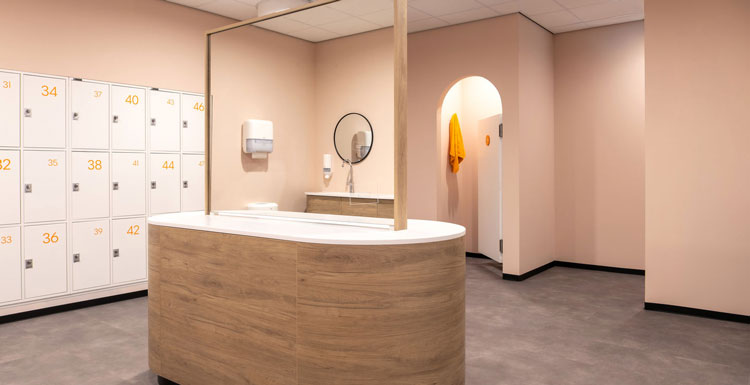 Basic-Fit is an established gym brand in Europe which recently launched a supplementary series of spaces aimed exclusively at its female clientele. The aim of Basic-Fit Ladies is to provide an exercise space that is both “comfortable and supportive”, in which women can “work out on their own terms”, according to international interiors studio UXUS, who were brought in to design it’s the first premises in Almere, The Netherlands.

A warm atmosphere was a necessity for the space, the studio says, and the team eschewed the usual pinks and purples often associated with women in favour of a neutral colour palette and natural materials. These stripped back elements help to underpin “a sense of simplicity and inclusivity”, according to UXUS.

Beyond the materials and colours, an emphasis has been placed on the customer journey. The gym space includes several open social areas, and these appear alongside detailed navigation and wayfinding. The overall intention, UXUS says, was to make customers “feel welcome, unrestricted and confident to explore”. 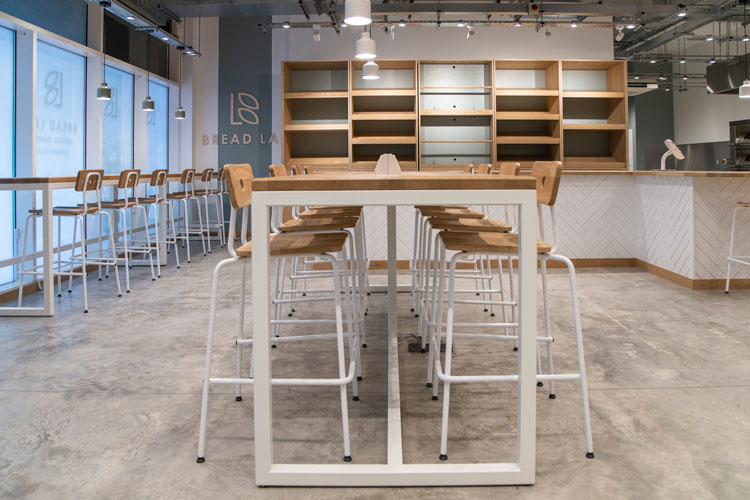 This project from Liqui Group combines the warmth of traditional bakery aesthetics with the clean lines and minimalism of a laboratory. Client Bread Bakery Lab, located in west London, wanted the interiors to reflect the “skill and science” behind the art of break making.

A bespoke lab table sits at the centre of the café, designed and manufactured by Liqui. This is complimented with trapeze seating and spun aluminium white and green pendant lights. All elements of the Bread Bakery Lab’s furniture and lighting solutions were manufactured in the UK by Liqui, the studio says, using sustainable materials throughout.

The overall look is a minimal one, but the laboratory touches are softened by natural wood and a muted colour palette. Liqui explains that the intention was to create a contrast between the lab aesthetic and the “rustic quality of the artisanal bread”, which will sit on display behind the counter. 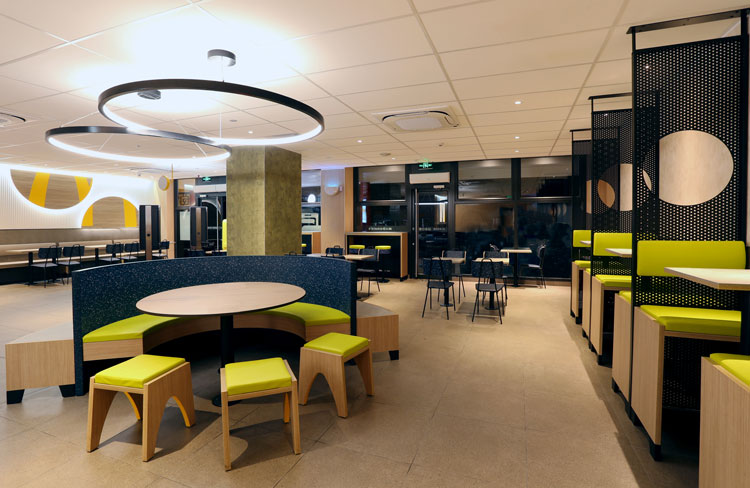 Fast food chain McDonald’s has taken on several forms throughout its decades-long history, but this latest iteration aims to be the most “welcoming, playful and shareable” yet. Designed by UXUS, the Luna interior concept was first developed for the Chinese market, but will now be rolled out globally.

Familiar elements such as the green and yellow colour palette are staying put but new layouts and materials are being introduced. These include circular structures loop over tables as partitions, while round windows and cut-outs provide “transparency throughout the space”. According to UXUS, the circle is a symbol of “inclusivity, unity and togetherness”, hence why it’s been used throughout.

A new focus has also been placed on moveable seating. Free-seating “encourages diners to shape their own experience”, UXUS says. Meanwhile a “new approach to materiality, colour and texture” has been adopted. A mix of materials like wood, textured vinyl and perforated steel aims to engage the senses, while warm lighting is intended to create depth.

Designers are helping esports brands sharpen up as business booms