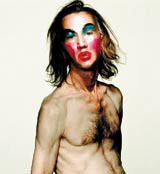 The Association of Photographers Awards come of age this year, with winners of the 2004 awards announced last week and two new categories making their debut.

New categories in the awards, now in their 21st year, include Zeitgeist, which highlights the best of the year’s photography from advertising, design and editorial, and the introduction of a £15 000 bursary.

Zeitgeist is designed to capture the ‘state of the moment and highlight what’s going on in the industry’, says an AOP spokeswoman, and comprises an exhibition of work rather than an award.

The exhibition is curated by a team of industry experts, including The Partners’ founder David Stuart, John Hegarty, founder of advertising agency BBH, and Marloes Krijnen of the Fotografiemuseum in Amsterdam.

Stuart says the judges were ‘looking for the way photography and the arts can be combined to produce a successful image’.

‘The best work comes about when a good photographer’s portfolio triggers a creative spark in the designer,’ he adds.

The inaugural bursary winner is Sue Parkhill. The award has been created to enable the recipient to complete a project that challenges their photographic ability. Parkhill aims to use portraiture and social documentary to explore how the cities of eastern Europe are catering for their poorest citizens.

In the AOP Fujifilm Assistants category, which is designed to give exposure to up-and-coming photographers, there were six winners – Rik Braune, Samuel Hicks, Joel Micah Miller, David Denny, Pedro Alvarez and Spencer Murphy – and six merits.

The Brixton Bar and Grill launches