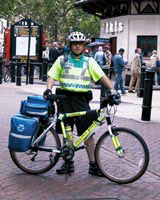 As everyone knows, pedal power is the quickest way to get around our capital city. Now the London Ambulance Service has launched a traffic-busting team of bicycle ambulances to cover the central parts of town.

In trials against the clock, these BMX bandits have beaten motorised paramedics to the scene of an accident 88 per cent of the time. But the most likely major causes of minor accidents in Soho and Leicester Square? Bicycle couriers and two-wheeled junior designers who can’t afford trendy scooters, we’ll wager.