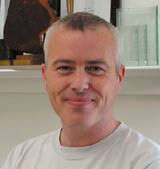 Alan Ainsley (pictured below) has resigned from Elmwood, where he was design director for seven years, to take up the same position at Navy Blue Design Group.

His role at Elmwood’s Leeds office will not be filled, according to consultancy chairman Jonathan Sands. ‘We have a lot of seniors already, and we saw it [Ainsley’s departure] as an opportunity to grow some new talent,’ he explains.

Though Sands is not seeking a replacement for Ainsley’s position, he says he is staffing up in other areas of the business. He is looking to set up a Melbourne or Sydney office after winning a substantial packaging design project in Australia.

‘It’s a six-month project and, if everything goes well, there will be a second phase to the work,’ he says.

‘Our Australian office will number about 15 people. We might open [organically], or we may acquire a small business there,’ he adds.

At Navy Blue, Ainsley will primarily be based in the Edinburgh office, together with creative director Jonathan Evans and fellow design director Bernie Shaw-Binns. His departure from Elmwood follows a sabbatical he took at the end of last year.