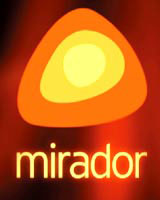 Choice and viewer empowerment were the driving forces behind the identity for new Spanish pay-per-view TV movie service Mirador, developed by UK design group English & Pockett for brand owner Estreno Digital. The channel is a joint venture between ten established Spanish cable companies. Initially, Mirador will offer 18 digital and five analogue channels showing a variety of films. The identity will be adapted for a wide variety of on- and off-air applications. ‘We had detailed discussions with the client to establish a look that satisfied a Spanish aesthetic without descending into clichÃ©,’ says English & Pockett director Michael Berthon. On-screen idents feature the ‘Mirador Girl’ in a variety of computer-generated environments.

BDI calls to the Midlands