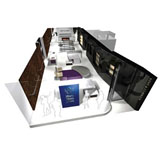 Softroom is designing a British-themed flagship store in London that takes its inspiration from Rolls-Royce interiors. The interior design is being put together for the gentlemen’s sportswear and accessories retailer Kent & Curwen.

The 130m2 flagship will open on Conduit Street in London’s West End in September. It has been designed as a ‘combination of luxury and craftmanship’, says Oliver Salway, director at Softroom.

The flagship launch marks a comeback for Kent & Curwen, after having downsized its UK operations to focus on growth in Asia. The Japanese company D’Urban Group bought the retailer in 1982.

Kent & Curwen is expected to roll out other stores in the UK, but has yet to reveal details of who will design the interiors. At this stage, Softroom has not been appointed to work on other interior projects for the retailer, says Salway.

The Conduit Street store will feature a curved display wall finished in black lacquer. The design takes its visual cues from the bodywork of a Rolls-Royce Phantom. Interior niches within the wall will be lined in tan leather and used to display accessories and shirts from Kent & Curwen’s autumn collection.

‘Britishness has become a tired cliché. We wanted to reconsider what that would mean and give a sense of the eclecticism of British culture to the space,’ says Salway.

One of the shop walls will be lined with parquet that has been reclaimed from the floor of an old building. Meanwhile, the ceiling will feature different textures to reflect the various fabrics historically used by Kent & Curwen in its fashion collections. The shopfront will boast a glass facade and gold-leaf lettering, to echo the

typically traditional look of stores in the Savile Row area.

Kent & Curwen originally launched in 1926 as a manufacturer of club, college and regimental ties and was outfitter to the English cricket team.

• Early stages of designing new Education Centre for the V&A, which opens in 2007

Zaha of all trades