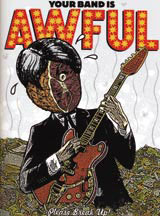 As soon as you see its simple, but subtly tactile cover, you know that you are in for a treat. Put together by San Francisco-based cult artist and rock poster supremo Frank Kozik (and designer of the book’s cover), Panda Meat is intended as a source book for cutting edge illustration and graphic design or, as the blurb would have it, ‘a designer’s dreambook’. Kozik’s selection criteria was simply that the 108 contributors had to design, illustrate and print their own work. While the artists showcased are predominantly American, others from around the world are included, and range from relatively unknown underground artists to established figures. As a consequence, the range of work is predictably wide, from the simple and twee to the rough and surreal. The work is largely drawn from the virtual community that has evolved around www.gigposters.com and the not-for-profit American Poster Institute, which this weekend will be having one of its conflabs at the Flatstock poster convention in Seattle. But if you can’t get to Seattle, or want to plug into the vibrancy of the American underground, you could always put a bit of Panda Meat on the menu.

Panda Meat/ Source Book 1 is published by Last Gasp on 8 September, price £24.95. It is distributed in the UK by Turnaround