The set of 12 stamps, which celebrates the UK’s contribution to video game design, features hidden messages and icons from the games themselves which can only be read under a UV light. Previously unmentioned by the design team, the additional feature was spotted by a fan on Twitter.

The history of the Easter egg

The secret UV messages were included by the team to pay homage to the video game “Easter egg” – the practice of hiding messages or objects within a game for players to find.

It is a tradition that goes back to video game developer Atari in 1970s, according to Bitmap Books founder and video game expert Sam Dyer.

“Atari forbade designers from being credited for their games,” he says. “So one designer, named Warren Robinett secretly hid his name within Adventure.”

This secret inclusion spawned a host of other Easter eggs over the years, cementing it as a much-loved video game feature.

Jamie Ellul, creative director of Supple Studio, says the team knew they wanted to do something special with the designs “right from the off”.

“We initially talked about using fluorescent inks to give an RGB feel but then we hit on the idea of UV inks,” says Ellul. “It felt appropriate to take the same [Easter egg] approach on the stamps.”

Dyer adds to this: “These messages are things you’d see in the game after an achievement – for example, the Elite stamp says ‘RIGHT ON COMMANDER’ which is a message that appears after 256 ship kills, [which was] no easy feat and an iconic phrase from the game.”

Similarly, the hidden objects in the Tomb Raider stamps, which depict four iterations of the iconic game from 1996, 1998, 2000 and 2013, are the various artefacts that Lara collects during her adventures. 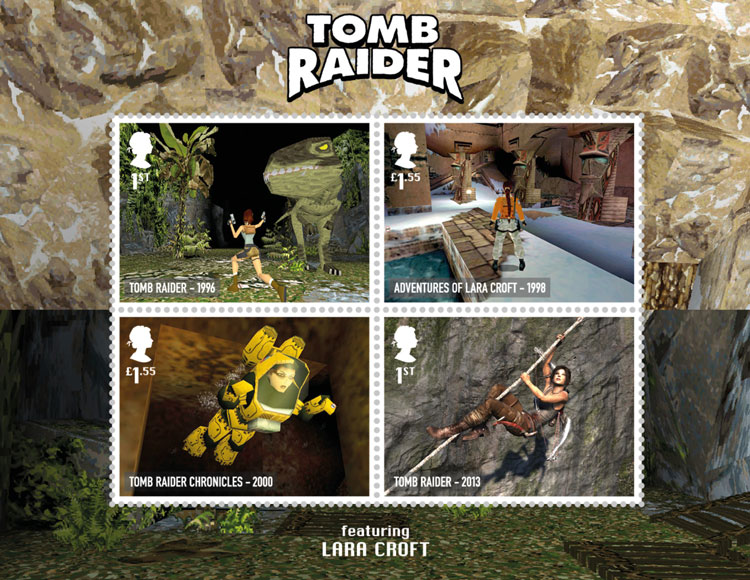 This is not the first time a ultraviolet ink has been used on a special issue stamp. The Star Wars commemoration collection designed by Interabang in 2017 used the feature to hide Jedi, Rebel Alliance, The Empire or Bounty Hunter icons on its character stamps.

Inspired by this, Dyer says it was “agonising” waiting for someone to discover the Easter egg.

“We’ve been gagging to tell people,” echoes Ellul. “But everyone wanted them to get discovered organically by a fan.

“It was beginning to feel like maybe no one would ever spot them – [but] it’s great to have the cat finally out of the bag!”

Fatconomy: could we build a new design system from waste fat?