Visa, which was established more than 60 years ago, says the adoption of a new visual identity is in anticipation of “the future of commerce”, which it predicts will be mostly digital. Because so many people still associate the company first and foremost with physical credit and debit cards, a change needed to be made.

Design studio Mucho, which has offices in San Francisco, Barcelona, Paris and Melbourne, was brought in to lead the project, which will see Visa undertake a “multi-year” brand transformation. 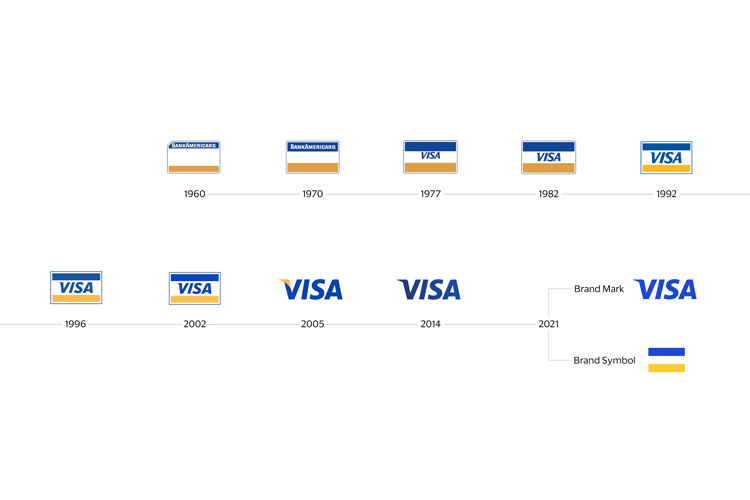 Mucho says to ensure the new look truly represented Visa’s “brand purpose”, the team came up with six design principles. These could act both as “guardrails” and reference points for the creative work to follow.

The six design principles were: “include everyone everywhere”, “lean into the future”, “lean with the heart, balance with the head”, “show up fully and boldly”, “simply powerful” and “set the stage for amazing”.

These reference points helped to guide Mucho’s work, but as the studio points out they will also be a useful guide for internal teams rolling out the identity system.

Throughout the project, Mucho says one of the most important considerations was creating “worldwide consistency”. The aim, the studio says, was to balance the heritage of the 60-year-old company with innovation.

This is why the primary brand mark remains largely untouched, the studio explains. “The design of the brand mark hasn’t changed, but we updated the colour to capitalise on Visa’s heritage while telling a new story about the brand — evolved, brighter, and more dynamic,” Mucho says. This colour change has the added benefit of working better in digital environments too.

Alongside the brand mark, Visa’s support brand symbol has also been refreshed. Additionally, from its design, the Mucho team has extrapolated a “simple rule of thirds” which can be applied elsewhere throughout the identity.

Supporting the brand mark is a collection of new elements, including photography principles, an icon and illustration system and new typography. The intention was to develop a suite of assets that could work as part of a flexible, yet coherent brand system, Mucho explains.

Underpinning the whole thing is Visa’s “one-colour” system, Mucho says – blue, white and yellow. A supporting colour palette gives the brand the chance to dial up or down depending on the circumstance, according to the studio. The result is a colour system that feels “intrinsically Visa”, says Mucho creative director and partner Rob Duncan.

These colours are used in Visa’s new icons and illustrations, which Mucho describes as “consistent and cohesive”. The icons are part of a modular system, which can “scale into illustrations” when needed.

Meanwhile photography principles are a way to “put their customer first”. A new cut-out style of portrait has been introduced, with a focus on what the studio calls “genuine photography”.

“Creative uses of the new typeface”

All of Visa’ communications will now appear in a new bespoke typeface developed by Mucho called Visa Dialect. Dialect is a humanistic typeface, and has been designed to be digital-first and highly legible across platforms.

“Rather than adding a superfluous graphic language to the identity system, we centred in on creative uses of the new typeface,” Mucho says. “By using Visa Dialect very large and cropping into the letterforms, we created a confident, bold expression for the brand.”

What do you think of Visa’s new look? Let us know in the comments below…