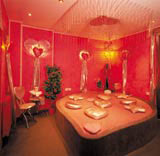 With their curtained or blacked-out windows, all illumination is artificial. As Fouad was determined to shoot these places in all their naked glory, there was minimal additional lighting and no styling. ‘Naturally, a well-kept room contributes to the image of the house and is therefore important to the owner as well as to the prostitute,’ he points out.

While it doesn’t appear that these places have had the interior design consultants in, they do display some rules of thumb concerning aesthetics and layout.

Unsurprisingly, the main attraction is the bed, though it might surprise the uninitiated that many are single rather than double. This is because half the rooms featured were in houses for ‘occasional traffic’ or clubs.

As well as the gadgetry, walls are adorned with mostly tacky art showing ladies in provocative poses. Meanwhile, the paraphernalia of the profession (lubricants, tissues and such like) stand brazenly by the bed.

When it comes to aesthetics, red and pink dominate. In fact, all the colour combinations would make John Pawson followers reach for the bucket. Some of the rooms share common features, clearly a case of the owner getting a job lot of items such as bedspreads or lamps.

Frauenzimmer mixes images of decadence with those of mean cheapness, demonstrating both spectrums of the ‘profession’. As a book it works on two levels: an insight into a hidden world and a set of interiors images. Either way, it’s intriguing stuff. m

Frauenzimmer, Brothels in Germany by Patric Fouad, £28, is published by Kehrer this month

Wide of the bookmark