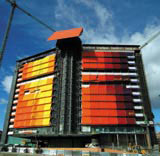 Since the 1980s, when celebrity designer Philippe Starck dreamt up the extravagant hotel concepts that ushered in the era of the boutique hotel, there has been a host of designs trying to pip him in the ‘wow factor’ stakes.

Developers are increasingly seeking to create properties with different, unusual thrill factors that cry out for attention, carve a place in the crowded market and ultimately satisfy the growing consumer desire for different hotel experiences. But as historical hotel designs – think themed colour palettes, standardised furniture, generic wall prints – becomes a thing of the past, where exactly is hotel design heading as a discipline and what form will the hotel of the future take?

Spanish hotel business the Silken Group is opening its 275m (£52m) Puerta America Hotel in Madrid later this year. It is designed by 18 of the world’s leading architects and designers, including Ron Arad, Zaha Hadid, Norman Foster and lighting designer Jason Bruges.

Plans are also underway to establish the first raft of Yotel! sites, the innovative hotel concept from Yo! Sushi founder Simon Woodroffe. The capsule rooms, designed by Priestman Goode, are built in a Japanese style and will make use of space that is usually overlooked – such as the basements underneath central London car parks (DW 10 June 2004).

Meanwhile, Ron Arad Associates is in the midst of developing designs for a radical luxury hotel concept Upperworld, as part of the Battersea Power Station development being carried out by family-owned Hong Kong Company Parkview International. It will feature shuttles that carry guests to their rooms, 44 spiral-shaped suites and a series of restaurants and bars (DW 2 September 2004).

Arad believes the future of hotel design is ‘beyond a simple interior design concept’, arguing ‘more designers should address hotel rooms and the hotel experience in a different way, they should not see this work as interiors only’.

For Upperworld he says, ‘We are bracing ourselves for the next stage any minute now, more design details are coming through. The hotel is a living organism and the project changes accordingly. There will be nothing like this, it is a one-off vision, a case of its own, not part of a trend,’ Arad says.

Beverly King, chief operating officer at Thistle Hotels, has overseen a £95m investment programme to refurbish the Cumberland Hotel in London. It is the first Thistle Hotels property to operate under its new de luxe brand Guoman.

King believes there is a new breed of hotels emerging as people’s expectations rise and they become more demanding. He forecasts a two-pronged approach ‘between those seeking budget accommodation and those looking for a specific experience that is creative, innovative and inspiring’. These factors will ultimately drive the design process.

He speculates on the future of ‘the bog-standard X-Room’, explaining that ’20 years ago that type of hotel, the branded company with the same style was fine, but people aren’t looking for that anymore, they want to be more adventurous’. The Cumberland is testimony to this current trend, with exhibition specialist Real Studios creating a ‘unique fusion of art, design and technology’ to entice consumers (DW 6 September 2001). The interiors include an animated graphics platform located behind reception, morphing lighting systems and a gallery in the lobby.

The next phase will be to add a health and beauty area, which will feature a private massage zone and hair salon, as well as a 465m2 ‘celebrity’ style bar. The new additions are due to open at the start of summer. The group is currently in discussions with designers, with a view to putting a pitch together later this year, says King.

The Maybourne Hotel Group, formerly The Savoy Group, is also gearing up for a major redevelopment programme, after the sale of the Savoy Hotel last month. The group is investing an estimated £100m in the three remaining London hotels, adding suites, spas and leisure facilities to The Berkeley Hotel, Claridge’s and The Connaught over a four-year rolling scheme.

‘Design has always been very important. We will be looking to appoint an interior designer to work alongside the architects,’ says John Small, marketing executive at the Maybourne Hotel Group.

Landor Associates was appointed to develop the new brand, following a five-way pitch last October (DW 27 January 2004). The identity is expected to launch in March across all corporate collateral.

Small believes the new identity is ‘forward-looking, discrete, and suitably universal’, claiming it moves away from a ‘Claridge Group’ type of brand to recognise the individuality of the hotels.

‘The market for luxury hotels is growing significantly and is becoming more affordable to a wider range of people. There is a cultural change [in progress], with people more willing to spend that little bit extra for a fantastic time – it is no longer the reserve of the wealthy,’ he adds.

‘Bricks, mortar and bed is no longer enough. People are looking for memorable experiences and the role of the hotel brand is to signal that difference,’ he says.

Branding consultancy Corporate Edge has worked on various projects for hotel groups, such as Travel Inn, Intercontinental Hotel Group and Hilton. Director Peter Shaw identifies the growing consumer desire for more. He says people’s expectations are continually growing within the leisure industry and that ‘the old days of generalist hotels that appeal to all people are not successful any more. It is about targeting the appropriate consumer’.

If uniqueness will be the main criterion for developers to create successful hotels, then potentially anything goes, making the hotel sector one of the most exciting design areas to watch.