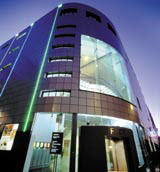 Independent art house cinema group, Picturehouse Cinemas, is carrying out its first ‘cohesive’ branding project that will bring together its 18 different cinemas under an umbrella identity, to bolster a long-term growth strategy.

The company, which runs both the Ritzy cinema in south west London’s Brixton and the Fact Picturehouse cinema in Liverpool, has appointed Together Design to create the identity.

The challenge for the consultancy was to develop a brand ‘which represented all of the cinemas, but retained the individuality and quirky reputation of many of the sites’, explains Andrew Woodyatt, marketing director at Picturehouse Cinemas.

Woodyatt emphasises the delicate nature of the work. ‘We have to tread carefully because we do not want to compromise the independent positioning of our cinemas. We are not like another slick cinema chain,’ he says.

The identity will create a standard graphic, look and layout for the cinemas and will run across in-house-designed brochures, signage and a revamped website, due to launch in April.

It will also brand a number of new cinemas, including London venues The Greenwich Picturehouse and the Soho Picturehouse, formerly The Other cinema, due to open this year. The group is looking at a further three cinema locations which will also come under the identity, says Woodyatt.

‘We needed to create a strong brand and a logical application that could work across all the cinemas and be usable in different formats,’ says Heidi Lightfoot, director at Together Design.

The marque is still being developed and currently being tested against the general public and Picturehouse Cinemas customers.