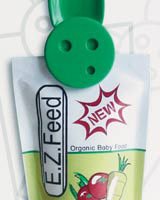 The writing category has scooped the overall prize in the 25th annual British Design & Art Direction Student Awards, at a time when the organisation is concerned over the future of copywriting.

Writing entries increased markedly after a push to talk up the discipline in colleges, and Kingston University’s Christian Stacey won the student of the year prize on the strength of a campus price promotion for The Guardian.

The team behind the other writing joint winner – Central St Martins’ William Bingham and Victoria Daltrey – also won one of two WPP Group bursaries, worth £5000.

‘Having creativity and putting words together to express it is a rare quantity,’ he adds.

Top prize in the inaugural D&AD/Nesta product design and innovation awards went to Nolan Chandler from the University of Hertfordshire. His EZ Feed baby food packaging, with a ‘squeeze ‘n’ feed’ device for parents on the go (pictured), receives £5000 worth of development support.

Direct mail was one of the most popular categories in a record year for entries – with 25 first prize winners, 27 second prize winners and 25 commendations from 2200 submissions from 24 countries.

The 2003 D&AD Student Annual, designed by Browns London, is now available priced at £10.

Those signs they are a changing