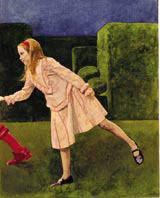 D3 Editions is set to launch a limited edition print of Lewis Carroll’s Alice: Through the Looking Glass, with illustrations by Sir Peter Blake. Publisher Douglas Wilson, the former design director of Ladybird Books and a senior lecturer at Nottingham Trent University, came up with the idea more than 30 years ago, while at the Royal College of Art alongside Blake. ‘I originally thought of contacting Peter shortly after leaving the Royal College, but the pressures of the commercial world meant the project went on hold.’ Blake and Wilson finally embarked on the project in 2001, with publication now due on 15 June. The book is available directly from the Nottingham publisher for £65.

Positive politics brings in the vote