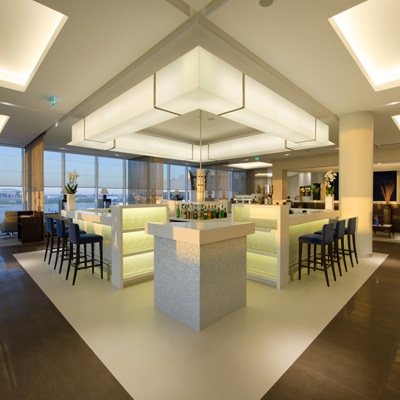 The consultancy was appointed in 2009 to work on Gulf Air’s entire brand image, including cabin design and interiors spaces, and the design of the Terminal 4 lounge is part of that larger project, says JPA design director Alex Duncan.

JPA was briefed to create a ’welcoming, comforting atmosphere to get people away from the stress of travelling’, says Duncan.

The lounge, which opens to the public today, features a bar, food buffet area and a dedicated dining area, all with a contemporary look and feel with Arabic undertones, says Duncan.

He adds, ’The lounge is an abstract interpretation of Bahraini domestic interiors.’

Visitors enter the lounge through a dark, atmospheric corridor, which opens up into a bright courtyard-style space, much like a traditional Bahraini house.

This spatial arrangement has also been designed to resemble the opening and closings of oyster shells, with a large light-flooding central space that leads to more enclosed areas.

The entrance was inspired by a Bahraini fort and has Dilmun seals – circular stamps thought to have been used for trade thousands of years ago – stamped into the wall.

The reception desk features a falcon feather pattern, which was developed especially for Gulf Air’s brand refresh in 2009.

The design of the lounge has been inspired by the theme ’pearl of the Gulf’, a name often given to Bahrain because of its pearl-fishing industry, says Duncan.

The lounge features timber panelling to evoke the hull of a dhow boat, and mother-of-pearl mosaics on the bar, which has been contrasted with rough, dark grey surfaces that resemble oyster shell.

Rich blue tones and gold accents run through the fabrics, fixtures and fittings and artworks in the space, to create a feeling of luxury and warm hospitality, says Duncan.
The mood of each of the spaces can be controlled by light settings, which will be adapted to suit different times of the day.

Howdy makes a splash with droplet logo for Lifehouse