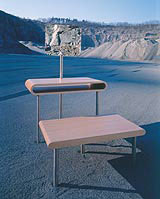 It can’t be easy for young designers to drum up interest in contemporary design in cities saddled with history and heritage. Take Prague, renowned both for its sumptuous Art Nouveau architecture and brutalist, communist-era buildings. A new gallery, Sovovy Mlyny, which houses the modern art collection of Czech-American Meda Mladkova, initially sparked an almighty furore because it incorporates a huge glass cube. Long before this, during the communist era, which only crumbled with the 1989 Velvet Revolution, any appreciation of contemporary design was stamped out.

But since then, Prague’s design scene has enjoyed a dramatic renaissance. (One setback has been the terrible floods, but the city is almost back on track now.) New ultra-chic boutique hotels like Hotel Neruda, the Eva Jiricna-designed Hotel Josef and Andel’s by Jestico & Whiles; lifestyle glossy Dolce Vita and leftfield architecture, design and fashion magazine Blok, which launched its first English language edition in the UK last month; design shops Qubus, Konsepti, De.Fakto, Modernista; and furniture and interiors group Tunnel all testify to an explosion of interest in design.

The city’s hip Holesovice area, a Shoreditch-like quarter and home to a Vitra shop and a design café, is being redeveloped by Frank Gehry and Jean Nouvel, and Prague’s annual design show, Designblok, took place last week. Similar to London’s 100% Guaranteed, it involved 38 designers showing their wares. Young Czech designer Maxim Velcovsky, for example, showed designs that reinterpret the Tetrapak at Prague design shop Qubus, and showroom 3DH displayed products by Tissetanta, available for the first time in the Czech Republic.

But it’s not all rosy. Czech designers are still struggling against a poor infrastructure, which has driven some of the best-known, such as Eva Jiricna, abroad. There’s a dearth of manufacturers sympathetic to their ideas, who are also notorious for their primitive marketing techniques. So many designers are now looking to build brand awareness abroad.

One of the most successful of these is interiors, furniture and product design consultancy Olgoj Chorchoj, which is coming to the UK for this first time early next year. It is exhibiting its elegantly minimalist glassware next March at London gallery Vessel.

Olgoj Chorchoj is the brainchild of 30-somethings Michal Fronek and Jan Nemecek, who set it up in 1990 while attending a summer workshop at Germany’s Vitra Design Museum. At the time, the duo were studying at Prague’s Academy of Arts, Architecture and Design.

The company name (properly pronounced, it makes an indescribably odd gurgling sound) doesn’t mean anything, say the pair. We didn’t want to go for a trendy acronym, explains Fronek, the more vocal and often excitable partner, who sports Clark Kent-like specs. ‘We chose our name because it sounded cheerful. People can pronounce it however they like.’

They are influenced by the simplicity of Czech Cubist architecture, the graphics, ceramics and glassware of 1930s Czech designer Ladislav Sutnar, as well as Bauhaus, Achille Castiglione and Jasper Morrison.

Olgoj Chorchoj has been busy since the early 1990s, when it forged its ultra-honed aesthetic in reaction to the whimsical style of Postmodernism, which was fizzling out. Fronek says its demise was largely precipitated by UK designers such as Michael Young and Morrison.

‘With Postmodernism, the form of an object was often gestural rather than relevant,’ says Fronek. Then, in the early 1990s, came the likes of Morrison and Young, whose minimalist designs, by contrast, were pure and their forms dictated by their function. But their work wasn’t boring or po-faced.’

That said, early designs had Postmodernist overtones, though these would soon disappear. Grandfather’s Bowl (above left), designed in 1993, is a chunky glass bowl in an inverted crown shape. In translucent greens and blues, it resembles a splash of water. It also looks like an alien spaceship, says Nemecek, the older, more placid of the two. ‘It looked Postmodernist, yet was meant as an ironic farewell to the movement.’ Its name refers to a Czech nursery rhyme – at the time, Olgoj Chorchoj allowed its work to carry literary, metaphorical references, something it resolutely avoids doing today.

In 1997, it designed Sony (above), a green glass bowl with a hollow that recalls the negative space around a TV screen. ‘We gave it its name because it looked Japanesey and minimalist. It was a bit of a joke,’ says Fronek. ‘Sony was chosen arbitrarily; we could have gone for any Japanese electronics firm,’ he adds.

But where to go after Postmodernism? In the case of Olgoj Chorchoj, it re-embraced 20th century modernism, appropriately opening its Prague office in 1995 in an ultra-geometric, Cubist former studio of an avant-garde sculptor. In line with this, its work became sparer, almost Bauhaus-esque in style.

The functionalist philosophy, which the pair claim is central to their work, has its roots in the industrial aesthetic of their earliest interiors projects, including a post-Punk reception area for Young & Rubicam in Prague, which made ample use of metal. Some of their early furniture looked forward to their later

Since the late 1990s, Olgoj Chorchoj has produced raw, technology-flaunting pieces in what is now its signature style. In 1998 came its Carbon 01 tables and bowl (the latter is in the permanent collection of New York’s Metropolitan Museum). The raw, unstained tables hark back to the 1960s, so it’s no surprise to hear Fronek say: ‘We’d love to see one in a Bond movie.’

Around this time, it produced similarly unadorned plywood furniture. The duo was not best pleased to discover one piece used in a Paul Smith advertisement, without any credit. Olgoj Chorchoj’s plywood benches also form part of its interior for the Dynamo bar in Prague, which has peppermint green walls and a huge LCD clock and barometer on one wall.

In 1999, Fronek and Nemecek hooked up with Kavalier Glassworks, a company specialising in ultra-tough glass that had manufactured Sutnar’s glassware in the 1930s. The resulting Look collection of glasses and teapots, now sold at Konsepti, is gorgeously understated. Kavalier also produced the Twin-wall collection: double-layered glass containers that make piping hot coffee cups easier to hold. Another piece is a vase whose inner wall is shaped like a drop. ‘We wanted to combine industrial elements with something softer, more organic,’ says Fronek.

And, hot off the press, is their design for L’Oréal’s Professional Colour Trophy competition. The piece, which was commissioned earlier this year by French ad agency Euro RSCG, is a simple glass vertical form containing a single strand of hair.

The duo is now busy refining a series of vases with hand-cut sides in bright colours, a sign perhaps that they’re revisiting the more decorative style of their earlier work. These are made from 5mm-thick glass with organic craters in it, so when the sides are cut sharply they contain shallow dimples, ‘resembling Emmental cheese’, Fronek says.

They are also experimenting with fusing layers of different types of glass, clear and opalescent, for limited edition pieces.

But with their burning passion for clarity in design, it’s hard to see them straying too far in the direction of colourful, organic design. Not for them grand, theatrical gestures. ‘Functionalism is the main reason for design,’ says Fronek. ‘Although aesthetics are important, an object’s function is the key element. There are people like Karim Rashid who design work just because it’s fashionable. They want to make their mark on the world, they’re megalomaniacal.’

Who knows, the Olgoj Chorchoj boys might end up enjoying a very similar stature over here. It’s unlikely they’d produce pieces as wacky and flamboyant as Rashid’s, but they might give him a run for his money.

Design in the Czech Republic

• Konsepti, a shop selling UK design such as Inflate. It’s owned by David Reznicek, director of Vitra in Prague and owner of the city’s design outfit Tunnel and Holport Café: studio@konsepti.cz

• The Czech Centre promotes Czech design in the UK and encourages the exchange of ideas between the two countries: info@czechcentre.org.uk