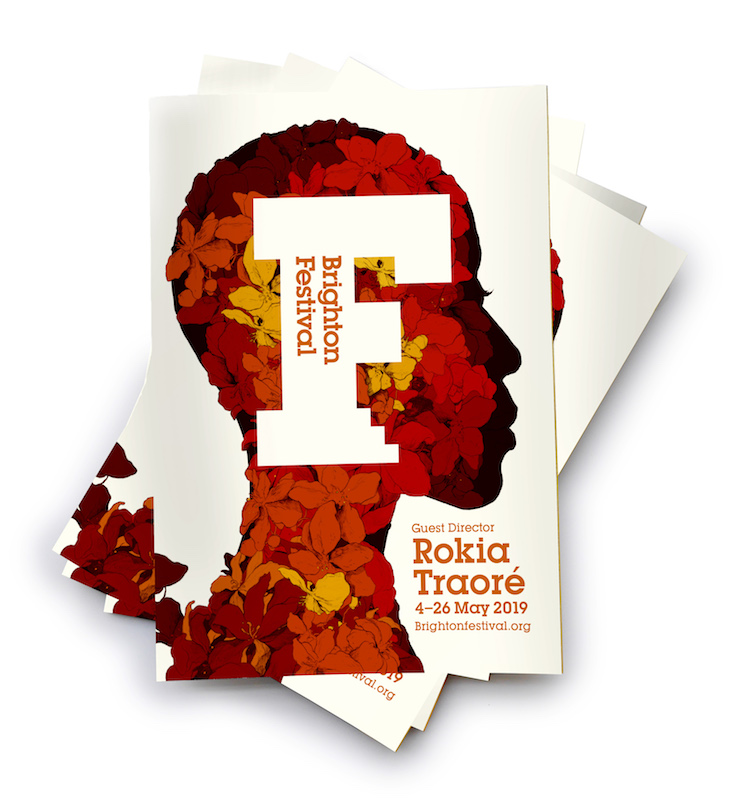 Brighton Festival has a new brand centred around an image of its guest director, Malian musician Rokia Traoré, which also aims to capture the idea of “coming together” to share stories.

Brighton Festival is an annual celebration of arts and culture, encompassing music, theatre, dance, art, film, literature, debate, outdoor and family events. Established in 1967, it takes place for three weeks every May in various venues across Brighton and Hove.

Since 2009, the festival has invited internationally recognised guest directors to help put the festival together, with musician Brian Eno, poet Kate Tempest and sculptor Anish Kapoor among those taking on the role in past years.

The guest director for this year’s festival is Malian musician Rokia Traoré, whose vision for the event is to “inspire and empower individuals and communities to meet, listen and pass on stories to the next generation”, according to Brighton Festival. 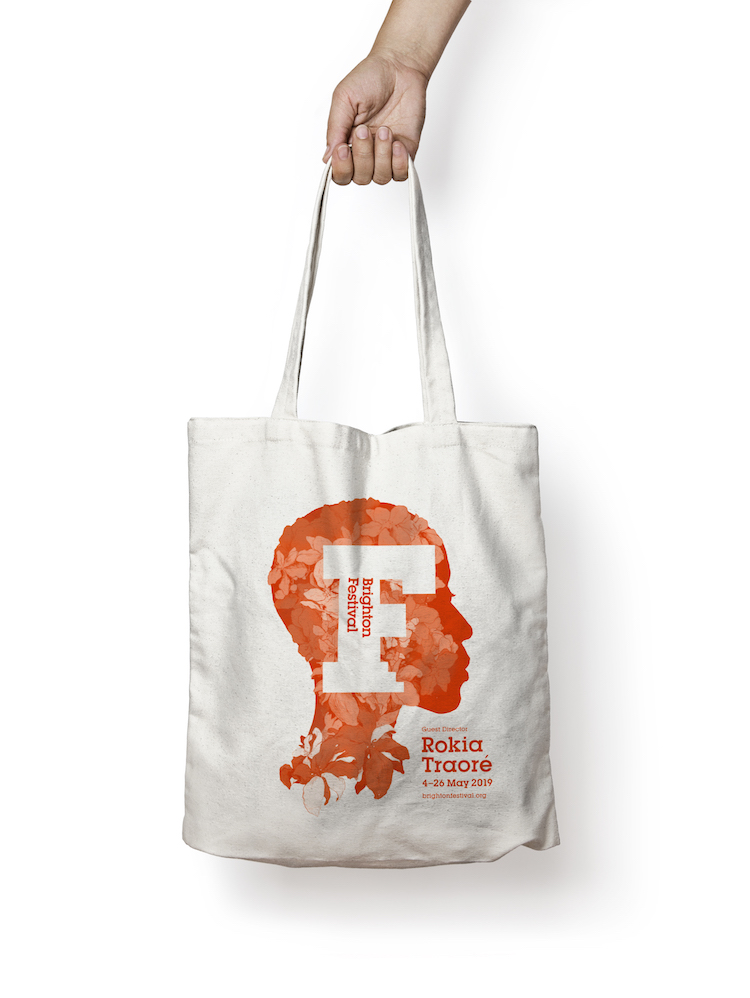 The new look has been designed by studio Johnson Banks alongside illustrator Simon Prades. As well as the identity, the studio has designed wider brand guidelines for the festival.

Traorés’ likeness has been used as the basis of the new identity, which Michael Johnson, creative director at Johnson Banks, says “clearly marks it as her festival”.

An image of her head looking sideways has been turned into a silhouette, illustrated by Simon Prades.

Johnson says: “Right from the first briefings, we were keen to use [Traorés’] profile as the basis of this year’s image. She a has a unique silhouette and we wanted to make the most of it.

“We looked at many approaches including photographic and graphic, but an illustrative approach just seemed to evoke the qualities that we were looking for.”

The illustration, drawn by Prades, aims to be a “celebration of growth, movement and ‘coming together’” that the festival represents, according to Johnson.

Brighton Festival’s letter “F” logo has been hand-drawn inside the silhouette in a white, serif typeface, with the words Brighton Festival written vertically within this “F”. The main typeface used across the rest of the festival branding is a slab-serif called Lubalin Graph.

The silhouette has been surrounded by graphic imagery of African hibiscus flowers in an orange, yellow and red colour palette.

The letter “F” logo was originally designed by Johnson Banks in 2013, and has been incorporated in various ways for the past six years in the festival’s previous identities. The main change each year has been the lead image of the identity.

“For locals, and increasingly the wider region, [the ‘F’] has a become a key signifier that the Festival is approaching, and is deliberately designed to partner with the identity we designed for Brighton Dome,” Johnson says. 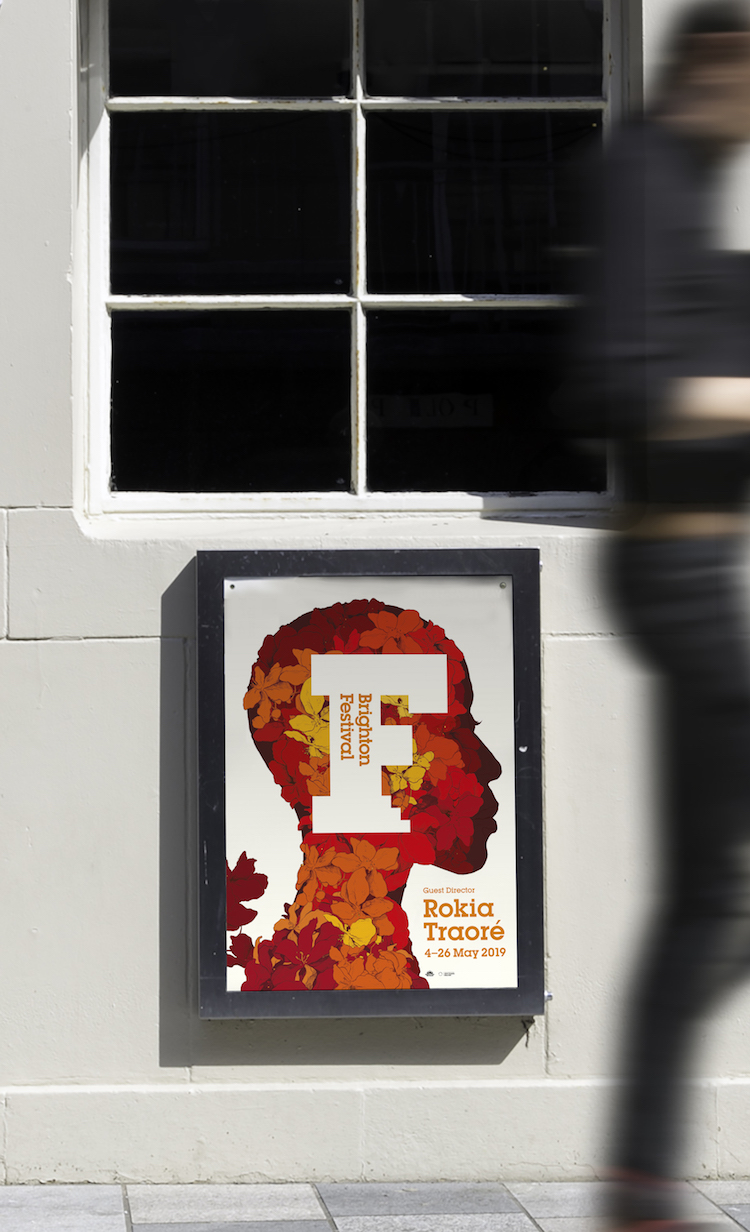 The identity for Brighton Dome, an arts and culture venue in Brighton, follows the same style as the Brighton Festival identity; it features a letter “D” icon, with the words “Brighton Dome” set vertically inside it, in a serif type.

The new Brighton Festival identity is currently rolling out across merchandise such as bags and t-shirts, on the festival’s website and social media, on signage throughout the event and on festival brochures and print materials.

Johnson also hopes to see the identity rolled out in more “weird and wonderful ways” as the festival approaches, such as “graffiti-ed on walls and telephone boxes”.

The launch of the new identity this week coincides with the reveal of the events programme for Brighton Festival 2019, which runs from 4-26 May this year. For more information about the festival, head here.

The impact of Bauhaus: designers tell us how it has influenced them