Strategy and packaging consultancy Bulletproof has given Meridian Foods a new identity in a bid to help the brand focus on its sustainability mission.

The new look for the company, which is best known for its range of natural nut butters, seeks to emphasise its “positive ethical stance” on issues that consumers are increasingly concerning themselves with, such as deforestation caused by palm oil production, the negative environmental impact of food air miles and the benefits of plant-based diets over processed foods.

Across the project, which began in July 2019, the Bulletproof team have introduced redesigned packaging, a redrawn logo, a more focused tone of voice and new typefaces.

A new “friendly and approachable character”

According to the studio, the previous Meridian branding had lacked a “recognisable brand icon”. The new look, therefore, is lead by a “vibrant rainbow” – a symbol that “inherently stands for positivity and radiates energy”.

This recurring rainbow motif will now be used in conjunction with a new Meridian wordmark across all nut butter products  and acts as a vehicle for the brand to show off its sustainability credentials. Across the range, the three-arched icon appears in different colourways along with the text: “We never use palm oil” and “Plant based”. 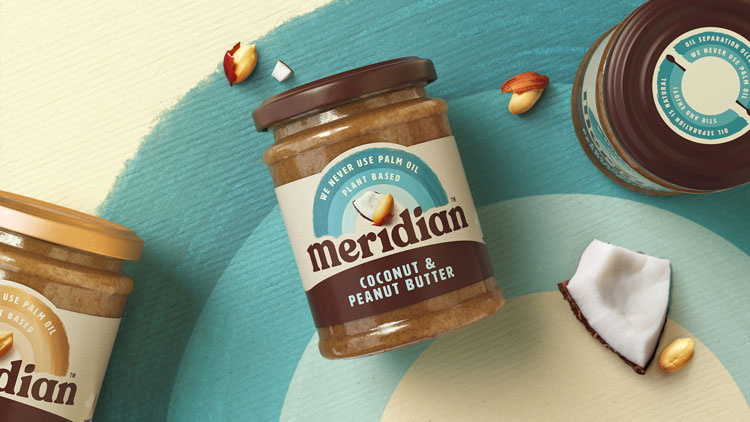 Wanting to further build the “recognisability” of the brand, the team also took aim at the logotype used on Meridian’s old packaging, which they say was “very serious and lacking weight”.

The new packaging sports an ultra-bold serif, chosen for its “friendly and approachable character”, according to Bulletproof. Rather than having it “curve around the horizon”, the logotype has also been grounded in a bid to add “bold authority” which had previously been lacking. 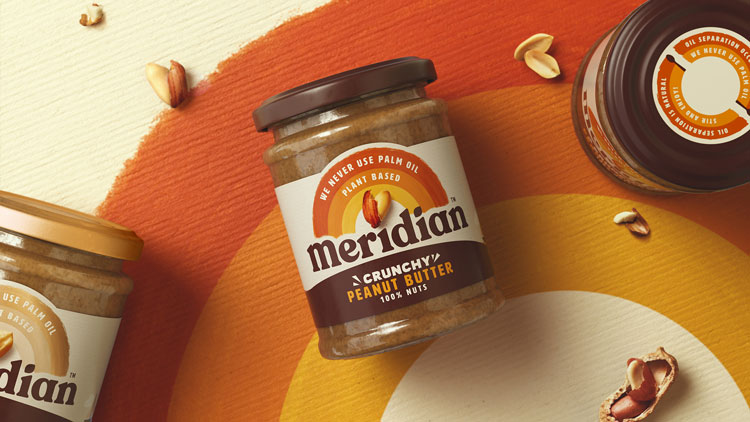 Throughout the new branding, nature has been used for inspiration. This has been done to further convey Meridian’s brand purpose, in which they “add nothing but natural ingredients [to their products] in a one-step process”.

The new colour palette, for example, is based in deep autumnal browns, which provides a “connection to nature”. The brand’s new rainbow icon, which appears in various tones of blue, red, green and orange is then used to add an “uplifting injection” of colour, which in turn aims to aid “shelf navigation” for shoppers both in health food stores and larger supermarkets. 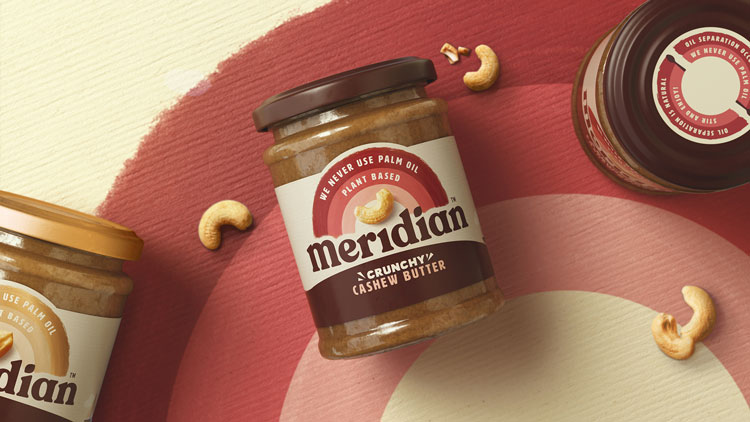 Additionally, images of the raw nuts and seeds used in the products appear on the packaging “with minimal retouching”. With this, the Bulletproof team aim to show that Meridian has “nothing to hide” when it comes to its processes and business practices.

The new look will roll out across Meridian’s nut butters in the UK this month, with the view to extend the design approach to the brand’s other ranges, including bars and sauces, in the future.