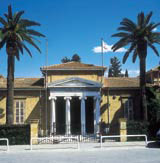 British American Tobacco is behind an unusual initiative to create a range of street furniture.

The cigarette giant has appointed Industrial Design Consultants to create the non-branded designs, which will be installed in the capital of Cyprus, Nicosia (pictured). It is thought to be the first such collaboration in the country. The commission is part of a long-term social responsibility project run by BAT, which will see the tobacco company work with a host of other local designers over forthcoming months on various design-led initiatives, such as product innovation briefs. IDC is collaborating with George Souglides, a freelance industrial designer based in Cyprus, on the first phase of the project. The preliminary product will be a series of ashtrays and bins.

A series of initial design concepts will be presented to BAT this week, with a view to launching the items in January.

The product portfolio is likely to expand to include ‘lots of different objects’. These may be rolled out throughout Cyprus, particularly across tourist hot spots.

The ashtray and bin designs are still being developed. IDC creative director Afroditi Krassa explains that they will be constructed from local materials, referencing the design heritage of Cyprus.

The items are to be drawn up in a classic style to ‘stand the test of time and fit in around the space’, she adds.

‘Nicosia is a real mishmash of a city in terms of design, and we have been looking at the streets and the architecture in this space. We want to create something that is balanced and proportionally correct. This is a very interesting project because the client is very open to what we can do – it is nothing to do with branding,’ she explains.

Souglides adds, ‘We have nothing to show at the moment, but these will be objects for everyone. It will have a big social meaning, it is about giving something back to the people.’

Nicosia is undergoing various building and refurbishment projects to reposition the city following its accession into Europe with nine other member states last May. Architect Zaha Hadid secured a commission to redesign Eleftheria Square in Nicosia at the end of last month.

The street furniture initiative follows a run of projects in which cigarette companies have collaborated with designers to come up with new ways to market and promote brands in the face of tougher European advertising censorship.

BAT has been working with London-based Fitch in London on a project to develop sensory branding and subconscious marketing, and is understood to have tested the use of distinctive smells sealed inside cigarette packs (DW 30 June).

Japan Tobacco International is also working with designers and artists to come up with more ambient ways of communicating with consumers (DW 26 May).