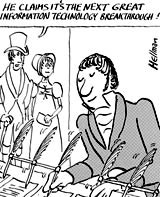 Let’s count the times I have found myself on the cusp of technological change. I got my first answering machine in 1980, changed from typewriter to primitive word processor in 1982, got my first fax machine in, what was it, 1988, finally yielded to the lure of the VHS video recorder in the early 1990s, got a notebook computer in 1993, a mobile phone around 1994 and hooked up to the Net around 1996.

Then there are lesser landmarks, such as my first car with electrically-operated windows, a CitroÃ«n in 1986. Or the 1998 flatbed scanner with the little gizmo that lets you take old 35mm slides and put them on to your hard disk in any format you like, so long as it is blurred.

This is the common experience of anyone living through the last couple of decades. Meanwhile, everyone had half a millennium to get to grips with the previous technological leap forward – printing. Apart from the epochal change from goosefeather to metal pen nibs, after that there was nothing much else to disturb your concentration until steam power came along.

Now comes the next big change, and it concerns the ancient wooden telephone pole outside my window. I like this pole. It has a messy crown of wires – which a pair of pigeons is currently investigating as a potential nesting site. It is at least 50 years old. And wondrous, invisible things are about to happen to it.

It distributes overhead paired copper wires – a transmission system unchanged since the Boer War – to around 20 houses on my street. Two of those wires, property of British Telecom, sail across to me. Two slightly smarter ones, from the local cable company, rise from the ground outside. All four lines find their way into my house through holes carelessly drilled by cheerful, brutal men: telecoms dentists.

It’s the ancient BT wires that will carry the revolution. I need two of them now, but come the end of June I shall only need one. This is because of the advent of Asymmetric Digital Subscriber Line technology. For those of you who don’t know it, ADSL is to old copper phone wires what tilting trains are to steam-era railway tracks. We used to think you had to build new railway lines to get trains to go faster. That was the equivalent of the other “new” telecoms technology known as ISDN – I forget what it stands for. New, different wires.

But then the Italians invented tilting trains that did not – like the 1970s British experiments – make the passengers sick, and which went very fast. That’s the technology being used by Richard Branson in his new, Priestman Goode-designed Virgin West Coast Line trains. Similarly, ADSL leapfrogs ISDN by somehow cramming unbelievably large amounts of data at huge speeds down those old copper wires. Unlike the tilting trains, you can’t see how they do it, but the upshot is – well, no doubt you’ve seen some of the publicity. If only the tilting trains were 50 times as fast. That’s how much faster ADSL technology is.

Which proves the old adage that it is good not to be first with the new technology, because something slightly better will be along in a moment. Being late succumbing to video, for instance, meant that I didn’t get saddled with the Sony Betamax. Not buying the first digital camera spared me having to tote around a cumbersome device with poor resolution. Were I older, I would not have bought an eight-track cartridge hi-fi system before the sonically inferior, but much handier cassette system achieved market dominance.

But for all that I came close – damn close – to getting an ISDN connection when I moved my office into my home last week. Desperate to speed up my congealing Web download times, I had even placed the order. BT, of course, neglected to inform me that their ISDN network, into which they had previously invested untold billions, would shortly be as obsolete as an eight-track stereo. Luckily, I twigged in time to cancel the order.

Since the ADSL system is not quite yet in operation in London, that leaves me with a couple of months of old technology. Hence my two freshly-installed standard phone lines, and my continued use of the equally standard 56Kb modem to log on to the Internet. This lengthy process already feels as cumbersome as trying to write on a manual typewriter.

In making the office move, I found two objects. One was the typescript of a short book – the last bit of work I produced in that 19th century way. The other was an early 2.4Kb modem, about the size of a Tom Wolfe novel. Both were poignant discoveries. But I kept the manuscript.