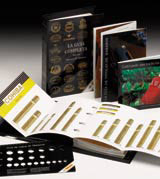 John Nash and Friends has created a raft of print work – known as the Habanos Booklet and worth in the region of £125 000 in fees to the consultancy – for Havana-based tobacco company Habanos SA.

It is the culmination of a two-and-a-half-year project for the group, which won the work in May 2001 following a three-way pitch. It then embarked on a year-long phase of research before creative development began. The work will be used to promote the company’s world-famous Cuban cigars to key international markets.

The project involved getting to grips with 33 different cigar brands, each of which has its own separate factory name, and presenting information about their shape and character in a way that retail and consumer customers would understand, says John Nash and Friends managing director John Nash.

‘What was required here was a certain plain elegance [to] work with the extraordinarily florid style of the traditional Havana brand[s],’ he adds.

The ‘marketing kit’ includes a brand directory, ‘ring gauge guide’ and a ‘sizing chart’ that set out the dimensions of some 240 varieties of cigar coming under the Habanos brand family. All the materials in the project had to be produced in six languages – English, Spanish, French, Italian, German and Russian.

Copy for the main brochure – a 60-page, photographically led ‘cigar bible’ for Habanos enthusiasts – has been written by freelance writer Mark Brutton in conjunction with Simon Chase, marketing director at Hunters & Frankau, the sole UK distributor of Habanos products and an important stakeholder in the project. Senior designer on the team was Peta Miller.

Habanas SA is largely run by the Cuban government, but Spanish tobacco giant Altadis is now a significant commercial partner.

Poke puts money where mouth is with charity site