The Home Futures exhibition which has opened at the Design Museum in London compares how past generations imagined we might live in the future, to today’s reality.

More than 150 objects, films and images from past and present are on display, exploring a range of themes such as the issue of domestic privacy, the minimum amount of space one can live in, how to make a home more sustainable and the concept of the home as a machine.

Eszter Steierhoffer, curator of the exhibition, says: “In the face of all the technological, economic and societal changes of the last few decades, our concept and notion of what home is is changing quite drastically.

“There hasn’t been a major museum exhibition for quite some time about the home and we were quite keen to put it back on the cultural agenda.”

While the architectural “shell” of many homes still looks similar to the past, she says, it is in fact our “domestic behaviour” and “perception of the home” that has changed the most.
“It was the biggest challenge of the exhibition… how to exhibit behaviour,” she adds.

The exhibition is split into six themes presented in six makeshift rooms: “living smart”; “living on the move”; “living autonomously”; “living with less”; “living with others”; and “domestic arcadia”, each exploring a different topic.

“We decided to look at how the 20th century imagined the future, which is our present,” she says.

“What I hope visitors can take from this is to compare all these alternative possibilities of how we might have been living today, or how previous generations imagined we would be living and to compare and contrast,” she adds. “It is almost like a distorted mirror.”

The show features historical works alongside modern phenomena, with important pieces including Smithsons’ House of the Future (1956), Home Environment by Ettore Sottsass (1972) and an original model of Total Furnishing Unit by Joe Colombo (1972).

One highlight is The Telematic House by Italian designer Ugo La Pietra, which appears in the “living with others” section and explores the idea of a screen or camera in every piece of furniture in the home.

“One image is an axonometric drawing that shows armchairs in a living room arranged like in an airplane,” Steierhoffer says. “At the back of each armchair is an integrated screen so you would not look at another person but sit one behind the other and interact through the screens.

“I think in some ways this is quite an apt representation of the way we are using our mobile phones. We do not have screens in all our furniture, but we do have a screen which we carry everywhere.”

Other key pieces in the show include Supersurface by Italian design group SuperStudio, which was first presented in 1972 at a Museum of Modern Art (MoMA) exhibition in New York called “Italy: The new domestic landscape”. The images now appear in the “living on the move” section.

Steierhoffer says: “The idea the designers had was that all of the man-built environment would be replaced by this universal grid which would cancel all the previous hierarchies and instate a new society in which there would be no labour and where no object ownership is necessary because everything is equally redistributed. People will be able to live in a truly nomadic manner.”

“Though it sounds wonderful as an idea, the images look quite dystopian,” she says, explaining that the piece was created when Italy was going through “political and economic turmoil” and was intended more as a statement than an actual prediction.

It has become “quite an apt metaphor of how we live today”, she says, due to the internet “redistributing knowledge” and making people more “globally connected” and “mobile” than before.

Juxtapositions of similar ideas from then and now feature throughout. In the “living with less” section, a model of Joe Colombo’s Total Furnishing Unit, a hybrid piece of furniture which can be transformed for multiple different uses is presented next to a more recent film by Hong Kong-based architect, Gary Chang, who explores flexible design by reconfiguring his small apartment by pushing walls around, to create 24 different rooms.

Other highlights include a “mobile office” inside an inflatable bubble designed in the 1960s. “I think this very much encapsulates what we are doing today with our laptops,” the curator says.

“The bubble is not there but there is an invisible infrastructure … we live in algorithmic bubbles.”

The three-dimensional (3D) design of the exhibition, by So-il design studio, references the “porousness” and “fluidity” between the inside and outside worlds with the use of “semi-transparent walls that are almost breathing,” Steierhoffer says.

“As you walk around you can hear sound and see light bleeding through from other spaces. You will see people’s shadows moving across the space and pick up on bits of conversations behind the wall.”

The exhibition is designed as a series of different rooms, with signs that resemble doormats on the floor at the entrance to each space.

“The architecture evokes different feelings and different experiences in each area of the exhibition” she says.

For example, a video for The One House 2030 project by IKEA-funded “future living lab” Space10, which looks at how we might live in the future, is presented in a large bed.

“You are watching a film about sharing in domestic space while you are sharing a bed with other visitors and strangers,” she says.

Florian Idenburg, co-founder at So-il, says the aim was to create an “immersive” experience that people feel they can “inhabit”.

“It was important in the layout to not have a fixed, singular route but that people could wander between the different sections,” he says.

There are many interactive elements throughout, with lots of furniture to try such as a seat resembling a giant bird’s nest. Green fibre-grate panel furniture is used to display items, which references the Guaderna furniture by SuperStudio that is in the show, according to Idenburg.

There are 40 films in the show, with many of the historic videos presented on old-fashioned televisions on tall legs and others shown as projections.

John Morgan Studio created the two-dimensional (2D) design, graphics, wayfinding and the exhibition catalogue for the show along with a series of six posters presented on the walls to introduce each section.

“It is really to make people think a little bit about the way we live today and suggest that there might be other alternatives.”

The exhibition is created in partnership with the IKEA Museum in Älmhult, Sweden and will be presented there after the show finishes at the Design Museum.

All exhibition photos © Felix Speller for the Design Museum. 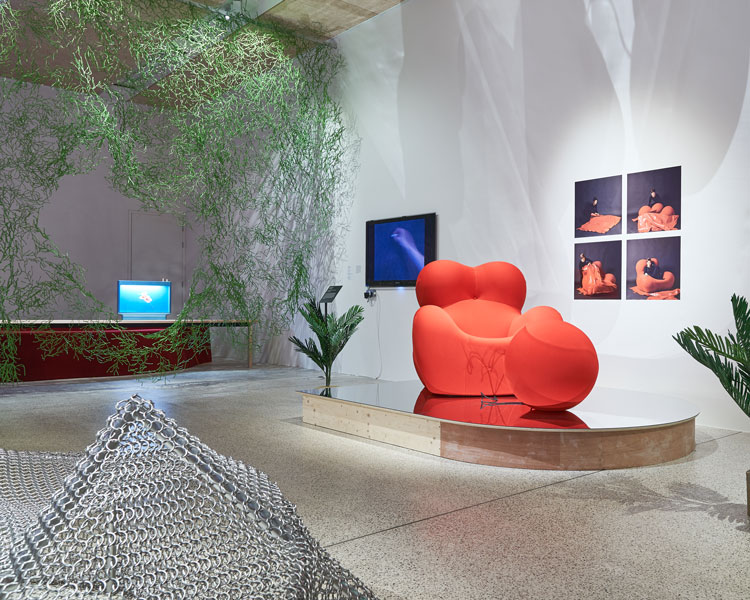 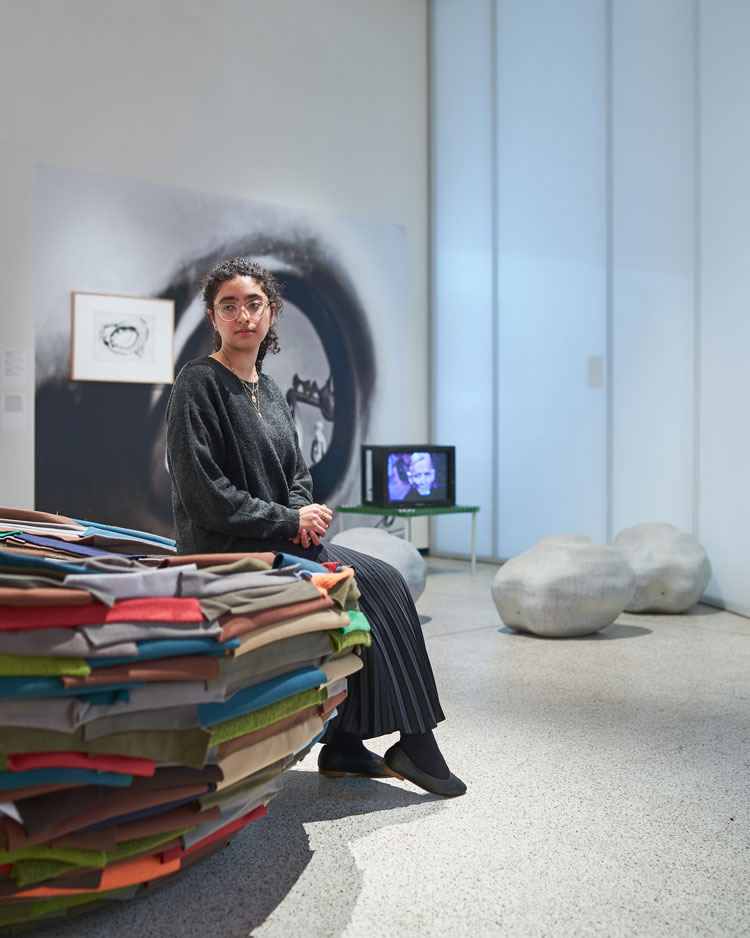 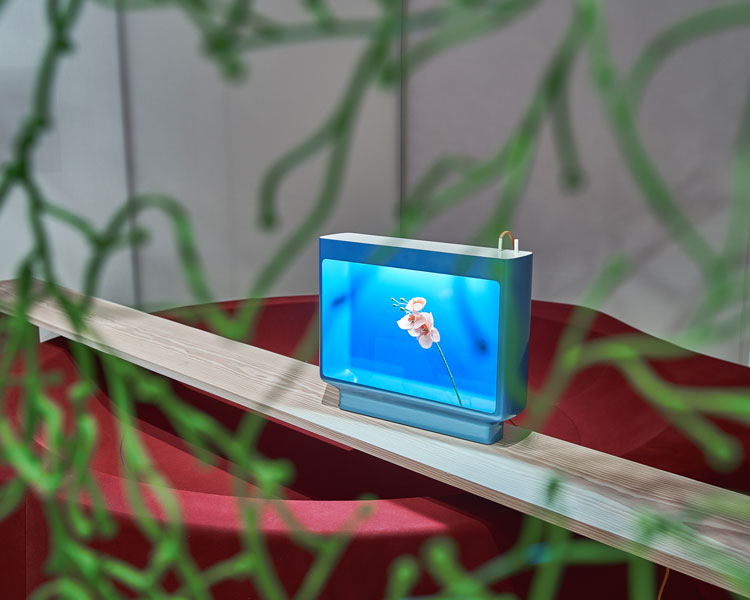