“Our team is pretty special, I think – you don’t often get this level of focus on design in tech companies,” says Ryan Sims, vice president of design at “gamified” language learning app Duolingo. “It gives us an incredible ability to tell stories and create moments for our users.”

Duolingo is the brainchild of Luis von Ahn, a professor at Carnegie Mellon University in Pittsburgh, US, and his former graduate student Severin Hacker. Growing up, Guatemalan-born von Ahn, who is also the mastermind behind the reCAPTCHA online security system, lamented how expensive it was for people to learn English.

With a belief that “free education will really change the world”, he and Hacker developed Duolingo. It hit the general public in 2012, and now eight years later boasts 300 million registered users, 98 different language courses and 38 different languages.

Right from the start, design has been a core tenet of the company, according to Duolingo head of art Gregory Hartman, who has been with Duolingo since its early days and is actually the creator of its beloved owl mascot Duo. This is because, he says, von Ahn has always recognised the “power of design” in helping keep learners motivated.

Sims says the Duolingo in-house team functions as a “small agency” within the wider company. Around 30 people make up the team. The company as a whole, Sims says, employs around 340 people, so design takes up a “sizeable chunk” of the staff.

The team line up features animators, illustrators and graphic designers. These creatives then work closely with Duolingo’s product and UX designers to create outcomes that “none could manage on their own”, Sims says.

“We match up our artists and designers with engineers and writers and eventually magical things happen,” he says. One of Sims’ responsibility in his role as VP of design is hiring. He says this involves “setting the bar very high”, so that the best creatives in their respective fields find their way to the company.

“In a lot of small companies, product designers will often have to wear many different hats – they have to do a bit of illustration, some writing, and maybe some problem solving and research,” he says. “What we try to do here is make sure that we’re hiring people with those specific skillsets, and then bringing them all together.” 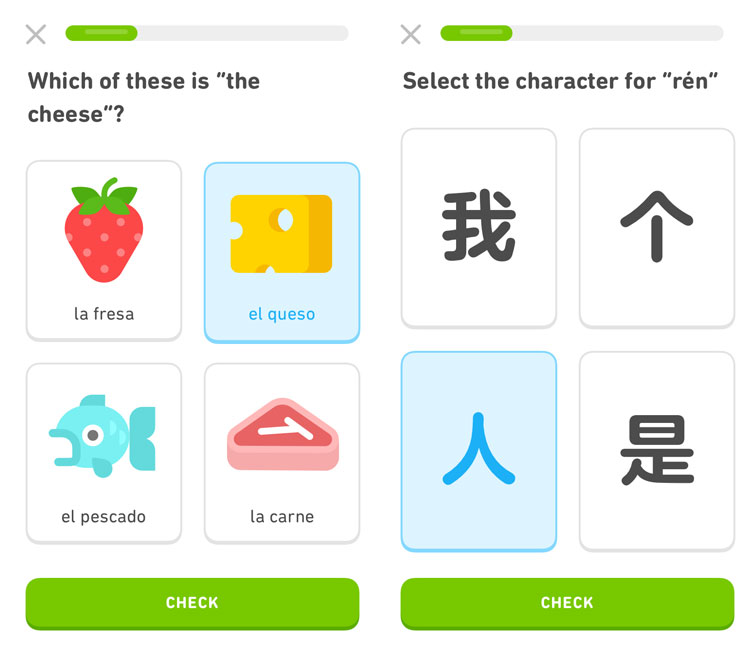 Briefs do not come from one single place, Hartman and Sims both say. Rather, they pop up through the various relationships and connections that the in-house design team and wider company have between themselves. Sometimes direction comes from the top brass, other times from project managers, product designers or creatives themselves.

“A product designer will come to an animator with an idea and they’ll discuss whether or not that is possible,” Hartman says. “Everyone is creative on our team – product designers are insanely creative – but they find solutions in very different ways and it’s all about making things delightful but also efficient.”

Duolingo’s most recent and ongoing creative project, Duolingo World, is a good example of a brief coming from the animators and illustrators themselves, according to Hartman. The project is focused on the development of Duolingo’s cast of characters and the world they inhabit. 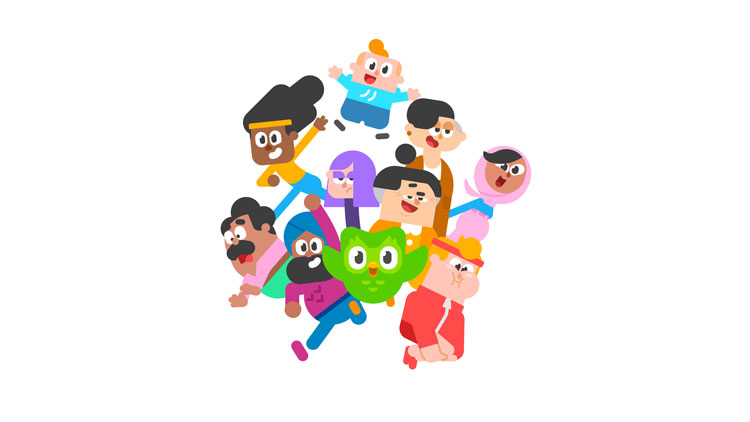 “It is a great example, because the idea for Duolingo World truly came from the insight that our artists have through their responsibilities and talents,” Hartman says. “They understood that as a gamified service, characters are a huge part of what makes the experience fun.”

While Duo the owl is the “main focus” in almost all cases (“Our world revolves around Duo,” Sims says), the wider cast of characters has been developed to provide an expanded world – much like the one users will find themselves in once they master a new language.

Duolingo World and other projects lead by the team strive to walk the line between “authentic and outrageous”. Characters play sport and dine out, as you would expect of people in the real world, but sometimes dinners are interrupted by octopuses. Hartman explains: “We value a world that feels familiar… but we also want people to experience these scenarios in the most fun way possible.”

How do different types of designers interact?

Both Hartman and Sims highlight the fact that working as part of Duolingo’s in-house team means interacting with a range of different creative people.

“It’s hard to find one designer who ticks all the boxes of being good at graphics, illustration, animation, product and UX,” Sims says. “But what’s so great here is that no one needs to be all those things – we all have respect for what each other can do and there’s something wonderful about working with someone who is great at something you struggle with.”

Hartman adds: “Every experience is a little bit different, but working with product and UX designers is good fun – animation, illustration and product design are all very different skillsets and they kind of all need each other to be successful in this context.”

By its very nature, learning a language is hard. Sims says much, if not all the work done by the design team is focused on helping users through this difficult but ultimately rewarding journey.

One method the team has arrived upon is allowing the app and its characters to celebrate with users as and when they get things right.

“Something as small as a character dancing on the screen when you answer a question correctly is a really powerful thing,” Sims says. “Learning a language is hard and keeping people motivated is hard, so we look for those little moments and focus on how we can celebrate them.”

Duolingo World is an ongoing focus for the team. As Sims explains, one of Duolingo’s company goals is to “build an iconic brand” and a well-considered cast of characters is how they plan on doing this.

“We look to the beloved characters created by the likes of Nintendo for its Super Mario and Zelda games and are inspired,” Sims says. “Other games’ capacity to build and maintain immersive worlds is something we are working towards now.”

Hartman echoes this: “A lot of the characters we play internally have great characters and those characters help to keep us engaged.”

“That’s how we’re going to take things to the next level,” Sims says.