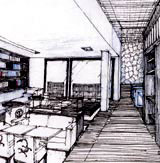 Alan Yau’s Hakkasan restaurant, just opened in central London, is an all-star designer affair, as you might expect from the man who founded the Wagamama noodle bar chain and co-founded stylish Soho restaurant Busaba Eathai.

Not only has Yau commissioned fashionable French architect Christian Liaigre to design the interior, but also waitress outfits by Hussein Chalayan, leather menus by Bill Amberg, ashtrays by Michael Young, lighting by Isometrix and graphics by North. The end result, says Yau, will create a highly design-led restaurant which has a contemporary style but, at the same time, also addresses its Chinese heritage.

‘It’s almost colonial, modern chic with a bit more of the Chinese-ness to it,’ says Hong Kong-born Yau. He charged Liaigre with ‘bringing back the dragon’ to create a modern ethnic interior instead of the minimal approach of many recent Chinese restaurants. Having already worked with Liaigre on the furniture for Busaba Eathai, Yau felt he would be perfect for Hakkasan. ‘The nice thing about Liaigre is that, although he’s an architect, he really made his name as a furniture designer. We can achieve a much more bespoke design by going right down to the furniture and the flowerpots,’ Yau explains.

Hakkasan is divided into a 130-cover restaurant, a 60-cover lounge bar and the focal point is a bar that is 16m long. For the bar, tables, and the prominent contemporary Chinese screens and latticing, Liaigre used dark-stained English oak, which contrasts with the low, white marble tables, the lilac and blue leather upholstery, the blue glass along the walls and the vivid red silk pendulum lighting, supplied by Isometrix and hung over each table to create a sense of intimacy. The bar area is dominated by an 18m-wide backdrop of sawn Welsh slate, accentuated with rippling lighting effects.

North’s graphics are influenced by the design of Chinese textiles. They exude quality and a subtle interpretation of the theme. The group’s starting point was a back-to-back letter ‘K’, which became the base for various patterns in rich orange, yellow and red colourways. These designs were then printed on textured paper for envelopes, forms, labels and paper.

North also hopes to incorporate the symbol into scarves and other textiles for the restaurant. ‘The identity is supposed to be a reflection or metaphor of all the contrasting textures and materials of the interior,’ says North designer Mason Wells.

Yau does not envisage a chain of Hakkasan’s, but would like to open one more, in New York.