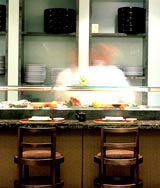 Four years after designing the Nobu restaurant in London’s Metropolitan Hotel, United Designers has completed a second restaurant for chef Nobuyuki Matsuhisa. Ubon by Nobu is situated in the very different environment of Canary Riverside hotel in London Docklands. The designers had to work with a challenging location that was fully glazed on three sides and acoustically harsh. ‘It was very glassy, very architectural and we wanted to soften it,’ says United Designers creative director Linzi Coppick, who wanted to avoid the often expected ‘traditional interior’ of many Japanese restaurants. The key to the solution was a 3.3m-high curtain of hand-threaded, Venetian glass curtain around the windows to soften the glazed walls and give an amber glow to the space when lit at night. Behind the glass are motorised sunblinds to further screen off the space. The beads are used again in delicate spirals hanging down from the inside of the downlighters (supplied by The Light Corporation) to give a soft, domestic feel to the space. Dark timbered banquette seating upholstered in textured brown chenille line the glass facades, interrupted only by the bar along the front facade, topped with a cream-veined Breccia Brown marble and faced in a textured copper-effect fabric. On the fourth side is the sushi bar, where an angled mirror above the diners allows glimpses of the panoramic riverside view.

In the centre of the 126-cover restaurant, chairs upholstered in burnt orange chenille are arranged around circular tables of maple and walnut, and stand on a dark, walnut timber floor – the autumnal colour tones inspired by something as non-Japanese as the colour range of a glass of Amaretto on ice. ‘It’s very different from Nobu. It’s still simple elegance, but richer and warmer,’ says Coppick. ‘We wanted to create a sophisticated backdrop that shows off the food rather than vie for attention.’ Construction costs, including kitchen equipment, were £1m.