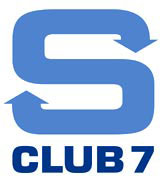 Pop band S Club 7 is set to benefit from a wide-ranging brand makeover, the first fruits of which is a new identity designed by Williams Murray Hamm.

The logo reflects the fact that the group and its fan-base is “growing up”, says Williams Murray Hamm director Dick Murray. It launches on 23 April to coincide with the group’s next single, Don’t Stop Movin’.

According to Murray, it is an evolution of the existing logo and part of a new initiative outside music for the group, which is still under wraps. “There comes a period in a pop group’s life when it needs to maximise its current success,” he adds. “For S Club 7, that time is now.”

The consultancy was approached in January by the band’s management company, 19 Management, on the strength of an unrelated project two years ago.