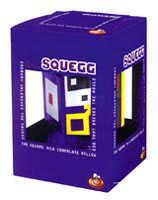 In the cut-throat world of Easter egg manufacture, shelf impact is all. If a choccy egg doesn’t scream “Pick me” as you peruse the hundreds on display, it doesn’t deserve a place in your trolley.

The problem I find, as a clueless parent with three ravenous chocaholics to feed (two children plus their mother), is that they all scream “Pick me”. One chocolate egg tastes very much like another in the price range we’re talking about (under a fiver), but the packaging is a far more competitive matter.

If you stop to think about it for longer than a nanosecond, you become uneasily aware of all the meetings, directives, memos and mobile phone calls that have gone into creating the Snickers egg, with its football-like wrapper and stadium motif on the box, or the Wonka Toy Gift Egg, complete with farting nerd, or the Toy Story 2 egg, produced by NestlÃ©, under the watchful eye of the mighty Walt Disney Corporation.

As with any product on display, brand identity is the key, whether it’s the Tweenies, Bart Simpson, Bob the Builder or teen pop idols Steps. Cleverly encased in a brand-targeted box, a bog-standard chocolate egg can seem like something rather special to the right recipient.

Easter eggs yielded a staggering £300m in the UK last year, an indication of the importance attached to this seasonal bonanza by the big UK chocolate producers such as Mars, Cadbury and NestlÃ©.

What the mass market people have to take into account, when they’re deciding how to pitch the package, is that it’s not the kids who do the buying, it’s the parents, grandparents, and so on, which explains why instantly recognisable brands such as KitKat and Smarties, all with us since the dawn of time, tend to be among the best-sellers.

Dazzled by the proliferation of TV cartoon characters and pop icons, Granny plays safe with something she’s heard of, like Cadbury’s Chocolate Buttons. You can crack the egg market into four basic groups: toddler, child, teenage and adult. Surprisingly, it’s the teenage market that consumes the most, all those emotionally starved Kevins and Perrys (Harry Enfield characters) subconsciously topping up their serotonin levels. This explains the market pre-eminence of the KitKat Chunky egg with its stand-out red and white packaging. Unlike the flowery designs for Cadbury’s Flake and Dairy Box, presumably aimed at the girly market, KitKat is unisex with a slight leaning towards boys/ young men. More importantly, it screams “Pick me” at the top of its box.

Thorntons, every chocaholic’s heaven on earth, win the egg race hands down when it comes to creative variations. Every kind of Easter chick and bunny you can imagine is represented in chocolate – I was particularly taken with the Beatrix Potter-like rabbit with its pockets stuffed with carrots – and they are equally impressive when it comes to no-nonsense eggs for adults, in which low key, tasteful packaging predominates.

Sainsbury’s is doing a vegan egg this year, made from soya, while Cadbury have pioneered the Squegg – an odd-looking square egg, with an equally odd-looking “phone holder”. Sure it has novelty value, but does it have shelf impact? In my local newsagent’s it was tucked away on a shelf that could only be reached with a stepladder. Sorry guys, but it’ll never catch on, sure as eggs is eggs.

Packaging a fishy tale just for the record