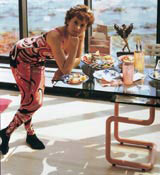 His wide landscapes prefigure Andreas Gursky’s epic style and the crafted compositions of Jeff Wall. His portraiture, solemnly presenting the stoicism of everyday lives, filters through in campaigns for clothing brands like CAT and Boxfresh. Yet US photographer Joel Sternfeld is relatively unknown on this side of the Atlantic.

The exhibition currently at The Photographers’ Gallery in London is his first solo UK show. Thanks to a clever piece of programming, running Sternfeld’s retrospective alongside the Martin Parr-curated Butlins extravaganza Our True Intent Is All For Your Delight, his lecture after the preview played to a full house.

A native New Yorker, with a droll, Woody Allenish wit and wiry hair, Sternfeld is wry and professorial in person. ‘The aim of this [exhibition] is to show that all Western two-dimensional depiction was leading up to my moment and will be poorer when I’m gone,’ he quipped at the outset.

Starting his career in what he memorably terms ‘the Early Christian period of colour photography’, he was inspired by that fugitive prophet William Eggleston. The prevailing view among photographic purists in the mid-1970s was loftily patrician: ‘Why work in colour when black and white is so natural?’ Sternfeld begged to differ, ‘getting together in basements’ with like-minded heretics.

Realising Eggleston already owned the ‘poetic snapshot’, Sternfeld needed to unearth another aesthetic. He found it, in true American fashion, on the road. In 1978, with only a Guggenheim Fellowship and a large format camera, he set out in a VW Camper van on what would become an eight-year odyssey, criss-crossing the continent.

He started, he says, desperate to redress ‘a New Yorker’s fantasy about what the rest of America looked like’ – to discover beauty or interest in the real landscape that was emerging in the recession years following the nation’s ‘unhappy bicentennial’. In this respect, Sternfeld had a similar outlook to New Topographic photographers like Robert Adams. But they worked in black and white and, crucially, turned their attention to the physical contours of the country more than its social content.

Sternfeld’s ‘almost apocalyptic sense’ was tempered, however, by the sheer scale and exoticism of what he observed. Thematically, he was influenced by the long-standing idea of ‘America as Art’, which holds the never-ending frontier as an Edenic treasure trove. ‘I have a schizophrenic sensitivity that bounces back and forth between utopian and dystopian points of view’, he confides. The series published in his 1987 book American Prospects, due to be reprinted next year, displays an awareness of ‘something awry between man and nature’.

A flash flood buries a cadillac in a landslide, a freezer-full of food is left standing in the wake of a tornado, a firefighter buys pumpkins while a farmhouse burns (pictured below). Images of ‘simulacra’ like the Wet and Wild waterworld and the hokum of city slickers on the cowboy trail suggest myth-making has always been part of the American scene.

Sternfeld’s portraits, from Stranger Passing (2002), also walk the line between fact and fable. Shoppers, farmers and businessmen are both individuals and archetypes, captured ‘in the midst of circumstance’.

Stare hard at these expansive canvases and chances are you’ll feel similarly involved.