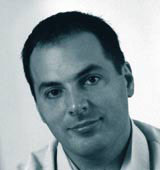 Franco Bonadio steps into the creative director role at The Body Shop next week, filling the post vacated by Paul Porral at the end of January.

Bonadio joins at a time when The Body Shop appears to have turned the corner after several under-performing years. Executive chairman Adrian Bellamy and chief executive Peter Saunders have invested in new products and, despite marginal falls in March’s annual results, analysts are talking the brand up.

Gail Piper, The Body Shop director of global marketing, acknowledges the brand ‘has not been communicating as effectively as it should be’ with customers, and says Bonadio will be tasked with ‘engaging in conversation’ with consumers.

Bonadio attributes the company’s recent sluggishness to increased competition and the fact The Body Shop’s ‘pioneering stuff’ has been widely imitated.

‘The Body Shop’s been copied by pretty much everyone, on issues like animal testing for example,’ he comments. ‘It’s difficult once you stop being a challenger brand and become a leading international player, [to retain] a distinctive voice.’