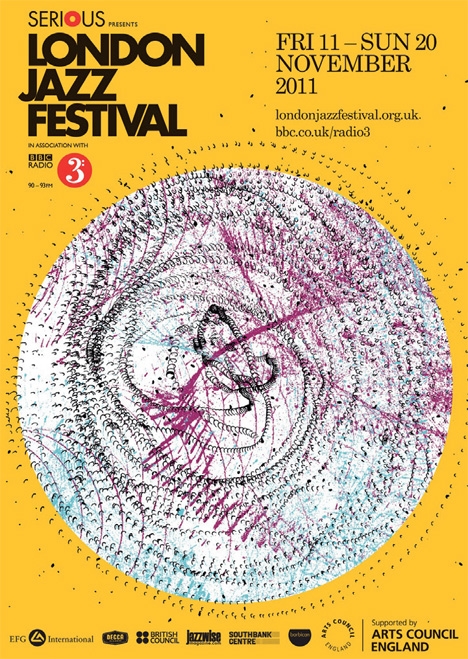 I Want Design has created the visual identity for this year’s London Jazz Festival, which will be held in November.

The festival, which is run by music producer Serious in association with BBC Radio 3, takes place at venues across London, including the Southbank Centre and the Barbican.

The consultancy began work on the project in January after working on the identity for the previous two years.

I Want Design creative director John Gilsenan says, ’The previous print campaign had a lot of saxophones and a lot of average illustration.

The brief in 2009 was to create a more abstract identity, which was appropriate to all the performances encompassed by the festival, says Lucinda Hilbery, Serious associate director of communications.

In response to that, I Want Design developed a circular shape reflecting the BBC Radio 3 and Serious logos, and featuring elements breaking out of a confined area with a sense of movement.

Hilbery says, ’The 2011 campaign is an evolution. We were keen to have a sense of continuity.’

For this year’s identity, I Want Design formed an abstract pattern in the circle using pencils attached to small motors.

Gilsenan says, ’There is some pulse and whir, but it’s a continuous motion. By attaching a pencil it flips out a bit. The idea is that there’s this underlying rhythm.’
The consultancy chose to feature the motor patterns on a white circle with four coloured backgrounds, the reverse of previous years.

Gilsenan says, ’[The circle shape] is about having a form that you break free from.’

The new identity, which rolls out this week, will be seen on London Underground posters, print ads, the event’s brochure, website and app, and on other collateral at the venues.

Principles easily forgotten when times are tough and clients ever demanding