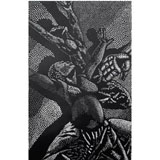 For printmakers working in South Africa’s sprawling and desperately deprived townships, finding the facilities to actually produce their work is hard enough. Back in 1989, when formal apartheid was still in place, the challenge was even greater.

This difficulty is reflected in the name – Hard Ground Printmakers – that white South African Jonathan Comerford gave to the workshop he set up to bring together people from different parts of South African society, giving them access to the equipment necessary for printmaking. Hard Ground punned on the actual activity of making prints, and also on the hope of what may come out of the venture – what seeds may sprout politically and creatively. Its large printing press, then the largest in South Africa, was, for instance, christened The Red Threat.

The work of some 18 printmakers from this collective goes on show this month at the London College of Communication, as part of an ongoing joint project with Cape Peninsula University of Technology. Included is the work of Billy Mandini, who died last year and who was prominent in the resistance art movement, as well as that of Comerford himself, who has recently decamped to London and closed the doors on the studio in South Africa.

Impressions runs from 19 October to 10 November at the London College of Communication, Elephant & Castle, London SE1