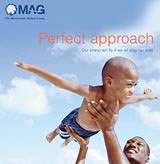 Manchester Airport Group is poised to launch a £100 000 visual identity, designed by The Pepper Corporation, in a drive to pull its fragmented operations under a single corporate umbrella.

Specifically, the move is intended to project MAG as an equal to BAA and enhance its visibility in the international marketplace, according to MAG head of group business development Yemmi Agbebi.

Pepper began working in January on the new identity, which unites parent company MAG with its regional operations, East Midlands, Bournemouth and Humberside airports, plus its related businesses including aviation services and development.

Roll-out will take a year, starting this month with corporate literature and stationery, followed by airport signage over the winter. By March MAG, which handles around 19 million passengers each year, aims to have 80 per cent of the business re-branded.

As before, a globe represents MAG, but now each regional company is characterised by a segment designed to clarify the group’s various specialisms.

Historically, each business has fostered a separate identity creating confusion in the marketplace and propagating a narrow corporate mindset among airport staff, according to Pepper chief executive Alex Bennigsen. ‘The orginal identity, featuring a globe looking more like a chocolate orange, had lost its meaning,’ says Bennigsen.

‘While we’ve retained the globe concept, it’s been divided into segments and colour-coded for greater flexibility. New business acquisitions can now be assimilated into the corporate brand without causing confusion.’

You could end up putting something back into design