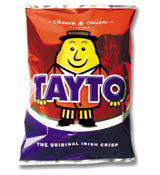 Tayto is Ireland’s biggest selling snack range commanding 45 per cent of the market, however its market lead is gradually being nibbled away by Britain’s top crisp producer Walkers.

‘The character represents much of Tayto’s Irish identity and research pointed to a huge amount of equity in the little guy,’ says Brigdale. ‘But Mr Tayto had become tired and slightly lost in the existing packaging. He’s now been modernised and positioned prominently to ensure instant recognition.’

Dynamo won the Tayto account in January following a four-way creative pitch against one English and two Irish consultancies. Work on the rebrand began in February.

Owned by the Cantrell and Cochrane Group, the Tayto stable also includes peanuts, popcorn and low-fat snacks, which are set to be overhauled in stage two of the rebranding project.