By the end of the 1990s the sheer scale of British Airways’ operations had led many people to see the company as a leader among airlines. Being big, reliable and prestigious were not, however, considered within British Airways to be the key ingredients for the 21st century. The late 1990s masterbrand repositioning study had refocused the airline’s advertising to become more people-orientated with a strong humanitarian element, but it was only the first step towards embracing still softer values. While the 1980s big-business values had produced a very successful company, being seen as more global, approachable and cosmopolitan was the new way to go.

British Airways had evolved into a clearly recognisable international brand and a product brand leader possessing considerable “image” capital, expressed as “a mixture of recollection, association and expectation shared by all successful businesses”. The big issue was the belief that to be a truly global brand the company needed more than just a common identity, i.e. the masterbrand element. While the Landor livery had placed British Airways on the world brand stage and had done its job well, what was now needed was a recognisable symbol of an organisation attuned to a rapidly shrinking world with a melee of different cultures, interests and a much looser affiliation to national identity. The new approach was to be “global and caring” with a multinational identity representative of a world airline in the 21st century.

On 10 June 1997 British Airways unveiled a new corporate image and mission: “To be the undisputed leader in world travel.” It was one of the most massive rebranding exercises in corporate history. The company’s entire fleet of aircraft, vehicles, stationery, catering, the uniforms of its customer contact staff, in fact everything that moved and (almost) everything that did not move, received a dynamic new look. It was much more than a change of graphics – it was intended also as a change in culture to reflect and incorporate that global and caring approach, the latter a much more difficult trick to achieve than with simply a lick of new paint. This new philosophy would build on British Airways’ undisputed reputation for customer service and take it into a “more globally minded future”. If it was to succeed it would be particularly important to redirect the airline’s internal culture; new management and customer service training programmes were introduced with the ambitious target to become the “best-managed company in Europe and the world by 2000”. If the key to success is to appreciate that you soon become what you intend to be, then it was a fine ambition to go for.

The essence of the new image was to turn around the perception of British Airways as a British airline with global operations and morph it overnight “to become a world airline whose headquarters happen to be in Britain”, that is to say a world brand and not just a worldwide brand.

This subtle redefinition would literally see the airline in very new colours. In fact, very many new colours, explained in the launch publicity as “a creative expression of a company which, both in the letter and the spirit, regards the whole world as its customer” and that “global and caring” does not mean post-imperialist flag-waving. It has to mean intelligently sensitive relations with customers and communities. Some thought that was what British Airways had always tried to do – within the limitations of international airline business, it had always been respectful and understanding of different cultures and traditions. A new livery was not going to change that, nor was an attempt to impose a culture of informality as a means by which to emphasise a new style of “caring”. Customer surveys had shown that cabin crews should retain their professionalism but be more informal, a little less “British”. In future, cabin crew were to be taught how to “study their passengers and adapt their personalities to suit the clientele”; that’s all very well, but forcing a personality change risks being seen as transparent and not truly “caring”, being “British” one minute and not “British” the next – a conjuring trick with risks and difficult for any but the best to perform.

British Airways’ new cabin crew training programme was called “Kaleidoscope”, a very apt title for a programme linked to the introduction of the airline’s new livery, itself a kaleidoscope of colour and patterns from around the world. These new colours were certainly that “creative expression”, turning what was previously a uniform identity into one of variety that reflected global interests. Using the works of artists and craftsmen from around the world, British Airways’ fleet of aircraft was to be the most visible expression of the new company. What became known as the “World Images” livery was intended to be reflective of different cultures and communities, but was meant to be much more than artistic paintwork. It was meant to indicate an appreciation of different people’s views, needs and expectations, recognising and respecting differences, above all understanding people and reflecting that in the service offered.

If British Airways could achieve all that, it would put the airline into a different league.

“World Images” was a very new and rather refreshing philosophy. Devised under the optimistic title of “Project Utopia”, it was another good example of British Airways pushing the envelope into uncharted waters, the sort of thing leading companies do, constantly challenging accepted custom and practice. It is that sort of process that makes for great companies, but changes of this sort of magnitude also include great risks. With 60 per cent of British Airways’ business originating from overseas, the risks appeared low. Such a business should have little loyalty to the concept of “Britishness” but should embrace the concept of the airline as a “world citizen”, and many people did. Unfortunately, a large and vocal slice of the remaining, UK-originating 40 per cent took the other view. The rather fine point of British Airways “becoming a world airline that just happened to have its headquarters in Britain” was, disappointingly, lost, and the public and media’s perception ranged from welcoming through perplexed curiosity to instant dislike. British Airways was still perceived by probably the majority of British travellers as the British national airline – it may have been “the World’s Favourite Airline”, but it was British born and based, and not some chameleon-like concept of multi-nationality.

The “World Images” kaleidoscope of colours did not last. From 1999, in recognition that a more balanced reflection of British heritage was also required, around half of British Airways’ aircraft were repainted in the “World Image” that was designed for Concorde – ironically a simple, graphic design of the Union Flag known as the Chatham Flag design. The flagship’s uncompromisingly British standard was thus passed to the fleet and, in time, became the central design of the British Airways masterbrand. As a concept, “World Images” was certainly groundbreaking. The belief and passion behind its “utopian” ideals were laudable, but for many it was a step too far. 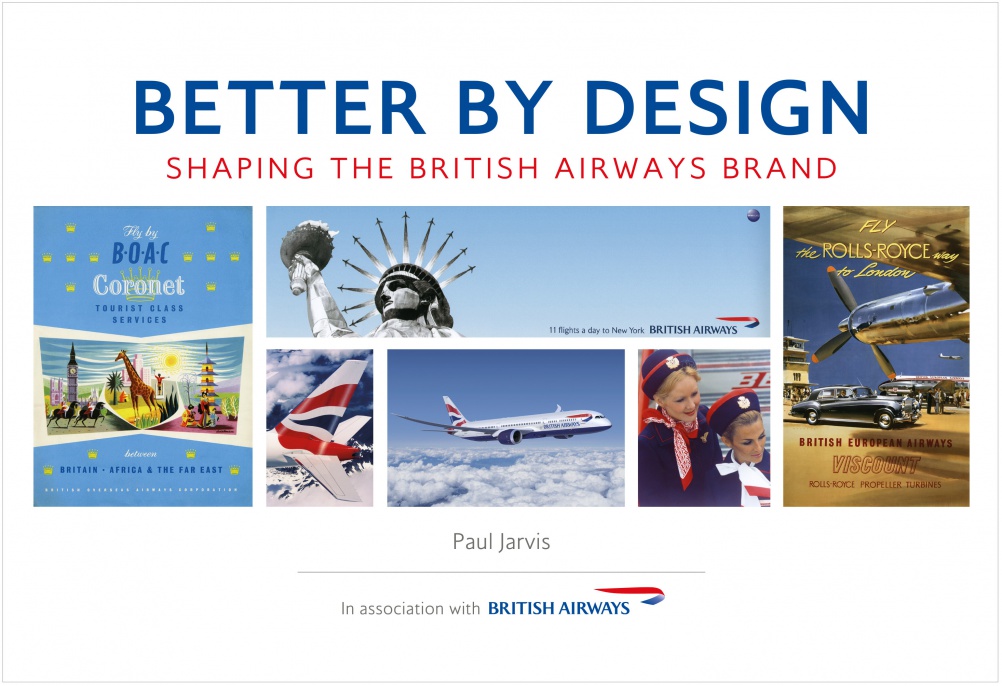 Better by Design: Shaping the British Airways Brand, by Paul Jarvis, is published by Amberley and available here priced at £17.99.