“I think we’re all aware of the design titans whose shoulders we stand on by working where we do,” says Jenney De Sousa, brand manager at Transport for London (TfL). As a designer at TfL, De Sousa is part of a multi-part in-house team which covers almost every touchpoint across the transport network.

Every designer working at TfL today is preceded by a considerable design heritage. The organisation, which was founded in 2000 was immediately preceded by London Transport, which operated between 1933-2000. Several of the organisation’s most recognisable assets are legendary pieces of 20th century design history – Harry Beck’s Tube map and Edward Johnston’s Johnston Sans typeface are just two examples.

Even so, De Sousa says the team has a responsibility to “look to the future” in all projects. “We can’t solely rely on the work of past designers if we want to continue to be the brand we are,” De Sousa says. According to her, the work of the in-house TfL team revolves around acknowledging its design heritage in a “future-facing” way. 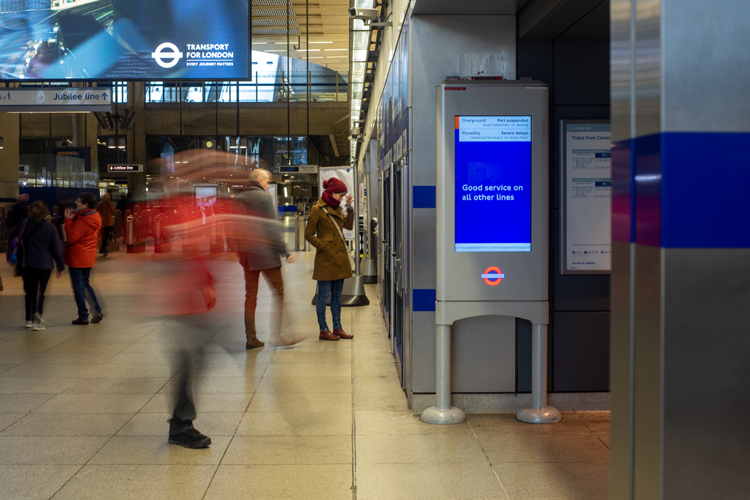 Many designers will be aware of the work the team does on Tube posters, underground wayfinding and staff uniforms but as head of design Jon Hunter explains, TfL’s in-house team works across everything from cycle lanes and street sign design, to urban realm interventions and junction improvements – as well as more traditional brand guardianship. “The whole city is really a canvas,” he says.

Such a huge remit requires a considerable workforce and Hunter says the design team is divided into several smaller groups which handle different roles. Among these are dedicated teams for product design, visual services, publishing, branding and more. These teams don’t all sit together, but “cross-pollination” is constant, he says.

Alongside Hunter’s design team sits the experience team, headed up by Hanna Kops. This is a digital-only team, which is focused on all elements of the TfL user experience and service design. Its flagship product is TfL Go, a travel app built around the Tube map which helps users plan routes and access real-time updates.

Like De Sousa says, marrying old and new is a large part of the job. Kops says TfL Go is great example of this, given that it uses the Beck Tube map in an interactive and relevant way for modern travellers. The visual language comes from the past but the application needs to be conceived from scratch, Kops explains: “It fits in the same visual family as the Tube’s traditional wayfinding and signage, but it uses huge amounts of data in a very modern way,” she says.

TfL Go is one of many ongoing projects and De Sousa explains projects come from a variety of sources. Some briefs are the result of a business requirement, like projects to do with Tube line extensions or cycle hire for example. Others come from people within the business, and it’s often De Sousa’s job to sit down with “brief owners” to build upon their ideas. The brand’s International Women’s Day and Pride celebrations are good instances of this, she says, because they require a lot of working with people – not necessarily designers – within TfL to find the best design route to tackle a topic “in a meaningful way”.

Underpinning all work is a “very robust” set of design principles, Hunter says. Because the team also works a lot with external suppliers, these rules are needed to ensure coherency across the network’s touchpoints. “It creates a kind of scaffold around our work,” he says, explaining that functionality and consistency are important.

An example is the recent Design Week Award-shortlisted collaboration between TfL and Sony for the launch of the PlayStation 5. Hunter explains there was a balance to be struck between being playful and exciting Londoners, and still being recognisable. “Ultimately we’re tasked with helping people navigate the city and any partnership can’t get in the way of that,” he says. 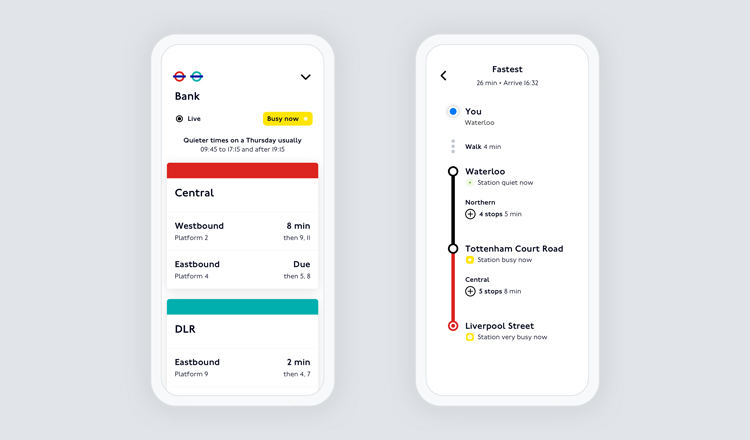 With such a large team in place there are many different kinds of designers on the payroll. For the experience team in particular, Kops says it is made up of strategic digital designers. “A lot of our work isn’t responding to a brief per se, but defining it and then shaping the work afterwards,” she says.

As well as UX, UI and visual designers, the team also requires designers that can work with data since this is what drives a lot of the digital work, especially on TfL Go. “We work with our engineers and data teams a lot,” explains Kops.  All three designers say the more appropriate term for the team might be community, given the nature of the work. 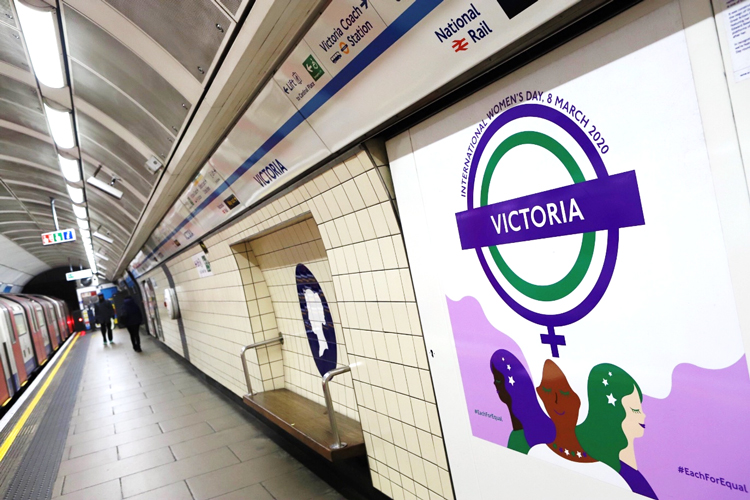 The design heritage is something all three designers mention as a highlight. Getting to feel a sense of ownership over the TfL roundel, which remains largely unchanged since its introduction in 1908, for example feels special, Hunter says. “People ask us often if we will ever have plans to change it, but it truly is iconic in that it has survived more than 100 years,” he explains. “While we don’t want to stay still, we are not about to throw away one of the most trusted elements of our brand.”

Kops also speaks fondly about the roundel and other TfL assets, saying that these are a hugely engrained part of London culture. “It’s not just about looking after the brand, I think our role is about helping the city move,” she says. “We couldn’t change the roundel, for example, because that’s how you know where the stations are!” 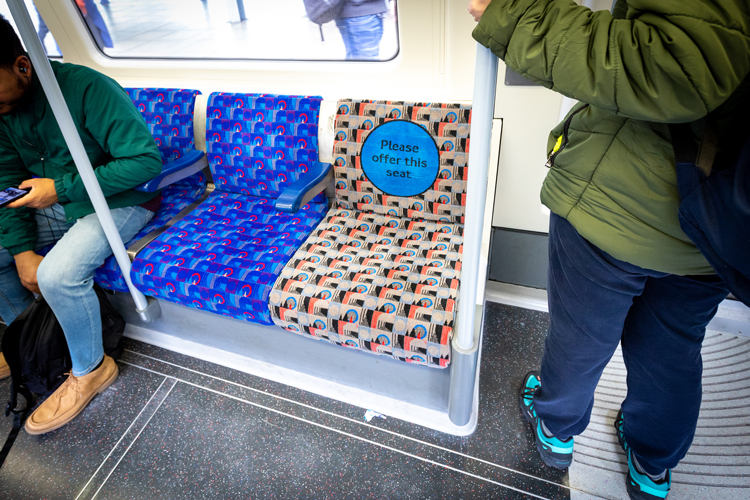 De Sousa, Hunter and Kops all stress that where challenges exist, so too does opportunity. That said, the biggest challenges on the job come from the sheer scale of the network and number and diversity of people who use it. “Our network is a giant machine and a small change can have a huge impact on so many customers,” explains Hunter. “A sign facing the wrong way, or a map missing a piece, and we’re talking potentially hundreds of thousands of people whose journeys are affected.”

As for the variety of people who use the TfL network, Kops says the design team has a responsibility to all of them and as such, inclusion is part of every project it carries out. She gives the example of TfL Go, which uses data to give real-time updates about stations. “For someone in a wheelchair, for example, this is invaluable information, because they can know with certainty that their stop is step-free from train to street,” she says.

Another example of inclusivity is the design team’s update of priority seating, Hunter says. By using a new moquette that very obviously showcases which seats should be given up for those less able to stand, instead of just a sticker as was standard, he says journeys are more inclusive and comfortable for all. 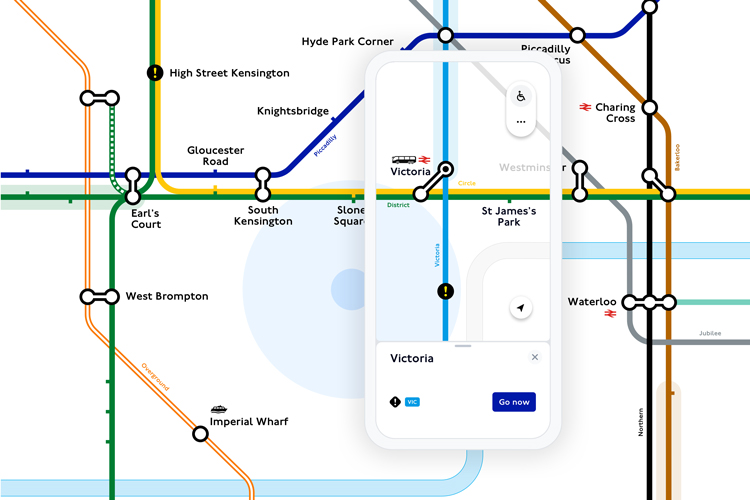 Requirements of the team change as the network does. Hunter expects there to be more design opportunities in micro-mobility as things like scooters and other lightweight vehicles continue to grow in popularity. “We will need to start looking at how we provide brand assurance across these products and services,” he says.

Given that many of these advancements will be foreign territory for a lot of TfL users, the way the team will do this is by building on the trusted relationship that TfL already has with its customers, he says: “In that respect, it’ll be more of the same for the foreseeable future”.

All images courtesy of Transport for London.