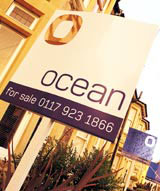 Thirteen has created a corporate identity for the Ocean group of estate agents that it hopes will make estate agents around the UK look twice at their logos.

It appears that one of society’s least loved trades does not boast brand identities as sharp as its employees’ suits, according to research by Thirteen, which showed the identities on for sale boards to be consistently ‘grim’.

‘Not only are all estate agents boring but their identities are dull,’ says Thirteen partner Nick Hand, who art directed the new look. The idea behind it is to treat for sale boards as street art.

Ocean’s latest boards, which made their debut last Friday, feature images of textures and surfaces from house and gardens, such as pebbles, painted slatting and wallpaper, shot by Alastair Hood.