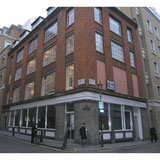 London’s Photographers’ Gallery will begin the hunt for interior and wayfinding design groups later this year, to work on its new site in Soho. A branding expert has been appointed already, but the gallery declined to name the group.

It is expected to embark on the next phase of development at the start of the year, by which time its newly appointed architect, O’Donnell & Tuomey, will have completed preliminary plans for the venue.

This week, O’Donnell & Tuomey won an architectural competition to design and build the gallery at 16-18 Ramillies Street, situated behind Oxford Street to the south. The Dublin architect saw off submissions and competitive interviews from 6A, DRDH, Jamie Frobert, Tony Fretton, McDowell & Benedetti and Howarth Tompkins to create a ‘world class centre for photography’, after planning permission was secured for the site last spring.

A spokeswoman for the Photographers’ Gallery confirms that consultancies are likely to be called in from spring 2007 to oversee graphics and interiors for the gallery, but this will not be until the current phase of building is completed, probably in the autumn.

The Arts Council is putting up £3.5m of funding for the gallery’s move from its twin homes on Newport Street, which aims to enable it to ‘challenge, examine, debate, exhibit and sell photography to a wider and ever more sophisticated audience’. Photographers’ Gallery director Brett Rogers says the aim is for the new space to become the ‘eyes, ears and voice for photography within the UK’. The redesign, she says, ‘will contribute a new cultural focus to a thriving part of Soho and ensure

London finally gets the dedicated international centre for photography it so richly deserves.’

• Spring 2007 – Designers to be appointed to create graphics and interiors