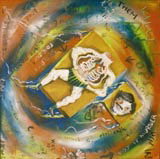 Comedian Vic Reeves will show his artistic ‘Doings’ next month in an exhibition of paintings, drawings and photographs.

Off-beat sketches of a Fat Elvis character going to the shops, as well as other creations with titles such as A Shrimp in a Suitcase on a Window Ledge, mark Reeves out as a latter-day Spike Milligan. His photographs suggest a surreal contempt for celebrity culture with dilapidated houses captioned as belonging to the likes of Sylvester Stallone.

According to artists Jake and Dinos Chapman, Reeves’ work is ‘able to command our laughter as a purgative, to encourage the viewer to leak at both ends’. You can judge for yourself at London’s Britart Gallery, at 60-62 Commercial Street from 3 July to 4 August.

Design Now – Graphics to run between 21 June and 27 October